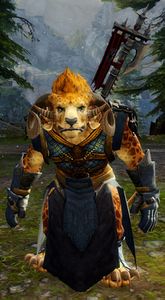 Nicabar Steelweaver is the best combat medic around. He makes some nervous with his magic—and his renegade past—but you can't deny the effectiveness of the tonics he brews.

Nicabar Steelweaver is a member of Ryland Steelcatcher's Steel Warband in the Blood Legion. He is a former Renegade who has since sided with the Dominion along with the rest of the warband.

Nicabar Steelweaver was brought up on stories of charr heroes and hated humans deeply,[1] leading him to become a Renegade when the Ebonhawke Treaty was in the process of being signed between the two races. He was quickly disillusioned to the Renegade lifestyle when it turned out to be less heroic than he had hoped for.[2] Nicabar became trapped in a cave (likely the Branded Mine) after being chased into it by a large Branded Devourer, and a human lured the devourer away, preventing Nicabar from starving to death. Witnessing the human's selfless action made Nicabar reconsider his stance on seeing all humans as enemies.[3]

Afterwards, Nicabar left the Renegades and began making tonics as he wanted to create something rather than just destroy everything others had worked for.[4] He entered the Ooze Pit Trials pledged to the Blood Legion where he was noticed and was mentioned to a Blood Legion tribune to be considered for the Steel Warband. A slip of paper suggests that the person who had suggested him to the tribune may have been Imperator Bangar Ruinbringer himself.[5]. Nicabar later met Cinder Steeltemper who brought him into the warband.[1]

Nicabar Steelweaver appeared during the opening ceremony of the All-Legion Rally of 1332 AE, fighting a Branded devourer along with Cinder Steeltemper and Ryland Steelcatcher. After the Elder Dragon Aurene flew by and Branded a broodmother which had invaded the rally, Nicabar walked away from the creature.

Nicabar would later appear in a vision of the Steel Warband witnessed by the Pact Commander. In the vision Nicabar was asking warband recruits to help him create tonics which would help them in the scouting mission. Before the warband set out, he requested alpine blossoms, cave mushrooms, grubs and handfuls of snow to gather supplies for the creation of some Health Tonics. After crossing the bridge, Nicabar expressed skepticism of Bangar Ruinbringer's ideal of 'one charr', asking what the other charr in the warband felt about it. As the warband approached the gate to a Stone Summit ruin, Nicabar suggested passing through the ruins to avoid the approaching blizzard. Afterwards, he began making another batch of tonics, this time out of only alpine blossoms and grubs. While traversing the ruins and fighting against the Stone Summit who were zealously guarding their once mighty fortress, Nicabar requested supplies for another batch of tonics, this time wanting cave mushrooms and handfuls of snow. After encountering and defeating the Ancient Forgeman, Nicabar discussed some of his past with a recruit to the warband.