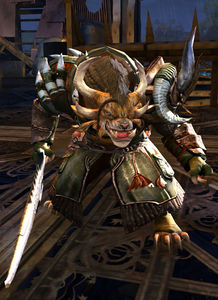 Maverick is a charr that is originally part of a charr player character's warband. He takes part in the battle against Duke Barradin's ghostly forces in the Village of Smokestead. If the player does not choose him as their sparring partner in their biography, he dies during the battle. If he is the player's sparring partner, he survives and helps them along the rest of their personal story and be in the player's home instance.

He is described as the best single-combat fighter the player has ever seen, although he also has a massive ego.

Section-stub. This key section of the article is incomplete. You can help the Guild Wars 2 Wiki by expanding it.
Reason: Missing dialogue from Drizzlewood Coast

How's the warband? (Same as below.)

Note: This dialogue seems to be exactly same as with Clawspur. Possibly the same as with the rest of the sparring partners.

Don't bother explaining. I plan to make the whole thing up as I go along.
Either you're the earthworm or the eagle, baby.
I wrestled a wurm once. You should have seen it!
Who's heard of the Maverick? What...nobody? Aw, come on!