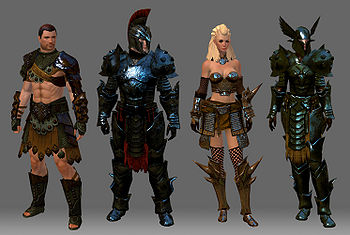 A variety of heavy armors.

Heavy armor is an armor class used by the soldier professions: guardians, warriors, and revenants. It provides the most protection amongst the three armor classes.

Hint: Visit the link of the armor set to get more details and visual preview for that set.

Heavy crafted armor is made by armorsmiths. The different sets are divided by the tier of the main material.

Cultural armor is equipment tied to a specific race. Only the applicable race can wear it, and it comes in three tiers.

Order armor is acquired from the order you chose during your personal storyline. Each character only has access to one of the sets.

These sets are acquired with tokens from the corresponding (explorable mode) dungeon. The vendors are located in Postern Ward in Lion's Arch.

These armors drop as loot at various levels. Some may also be rewards for map completion.

These armors are acquired in Structured PvP.

These armors are acquired in World versus World.

These armors are acquired by completing collections.

Armor skins are consumable items that can be applied to your existing armor or unlocked in the wardrobe.