From Guild Wars 2 Wiki
Jump to navigationJump to search
Spoiler alert: The following text contains spoilers relating to Stronghold of the Faithful and Living World Season 3. 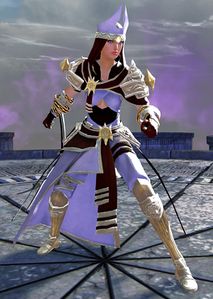 For hundreds of years we have hidden in plain sight, living in your cities, manipulating your politics. Soldiers, farmers, scholars—all swearing allegiance to the cause...all waiting for the moment to strike. Our time is now. We rise from the shadows to claim what is ours!

Xera is the High Inquisitor of the White Mantle. She serves as the final boss of the Stronghold of the Faithful raid wing.

Xera was a faithful servant of the White Mantle cult, loyal to the mursaat or Unseen Ones, and whose main goal was to resurrect the last of them, Lazarus the Dire.

Xera eventually learned what had really happened to the last mursaat. Lazarus had been betrayed, his power turned against him and, to survive, he had to split his soul into five aspects. Each of those aspects had been hidden and scattered across the Maguuma Jungle and sites sacred to the White Mantle.[1]

Justiciar Xera was dedicated to her task, and purged nonbelievers among the White Mantle, many of which worked under Justiciar Caudecus. Xera's investigations prompted her to write to Caudecus to express her concern over how many of the Justiciar's followers were straying from the goal of serving the Unseen Ones.[2]

In 1325AE, the Shining Blade and the Hero of Shaemoor raided a White Mantle hideout in Kryta and killed Confessor Esthel. Caudecus succeeded her, becoming Confessor and leader of the White Mantle, and naming Xera High Inquisitor as his second-in-command.[3][4]. But while Xera was loyal to the original goal of the White Mantle, serving the mursaat, Confessor Caudecus was more focused on the Krytan throne.

The White Mantle further splintered into those loyal to High Inquisitor Xera, who wanted to serve the mursaat and were focused on Operation Rebirth to restore Lazarus; and those loyal to Confessor Caudecus, who wanted the White Mantle to rule Kryta. Once the five aspects of Lazarus were found, Xera, Matthias, and other like-minded zealots decided to continue working on Operation Rebirth as their primary objective behind Caudecus's back, as they relocated to the Stronghold of the Faithful in the Forsaken Thicket.

By 1329 AE, Scholar Glenna and a group of raiders assisting the Pact entered Forsaken Thicket while investigating strange disappearances in the region and discovered a heavy White Mantle presence. They fought their way past sentries to the Stronghold of the Faithful. Xera's attempts to stop them by sending both the cultists and her creation, the Keep Construct, to fight them proved to be futile. She even accidentally slipped up during her gloating by revealing the White Mantle's plans to revive Lazarus, which clued the raiders in on what she and the cultists were really up to.

As the raiders fought the Keep Construct, Xera realized that killing them wasn't working, and proceeded to stall them. She drew power from nearby Bloodstone shards to enhance her mesmer magic and, when the Keep Construct was killed and exploded, she used her power to amplify the explosion and destroy the Stronghold. She used her magic to levitate fragments of the Stronghold in the air to create the Twisted Castle, a labyrinth. The raiders had to fight their way through the maze that defied reality, teleporting from platform to platform, while Xera's magic twisted their minds.[5][6] When the raiders managed to navigate through the twisted castle, Xera finally confronted them herself and fought them as a last resort to buy more time for Lazarus to be fully revived. Although she perished in battle, Xera had ultimately succeeded to stall the raiders long enough that they did not find any mursaat in the revival chamber by the time they got there.

However, unbeknownst to Xera and the raiders at the time, before Xera left for the Stronghold of the Faithful, one of Caudecus' lacqueys secretly swapped one of the artifacts imbued with Lazarus's aspects with a fake to ensure that the ritual to revive the mursaat would fail even if Xera could carry it out.[7] Without this artifact, the real Lazarus could have never been resurrected.

Primary article: Stronghold of the Faithful#Xera

Effects applied only to bloodstone fragments and players not on the center platform.

Your life is mine.
Who wants to die first?
What are you waiting for?
Go ahead—make the first move.
How does it feel to make it so far only to fail?