Glint's general is Gwen Thackeray. The Goremonger. Killer of charr.

In life, Captain Gwen Thackeray was a commander of the Ebon Vanguard and the founder of Ebonhawke. In death, Gwen's ghost is a general of the Mist Wardens. Gwen is a legendary figure among both humans and charr; to the former, she is a hero and ancestor to Logan Thackeray, famous captain of the Seraph and member of Destiny's Edge. To the latter, she is a terrifying villain who viciously slaughtered hundreds of their people, earning herself the title Goremonger.

Born in Ascalon as the daughter of Sarah, Gwen's earliest years were peaceful; her biggest worry at the time was leaving her flute by a nearby river and being unable to reclaim it from aggressive wildlife until a hero returned her broken flute to her. These peaceful days came to a sudden end when the Searing struck Ascalon on her tenth year. She lost her family, her home, and her childhood in a matter of hours as the sky-summoned fury of the charr shamans shattered the world around her. Thousands of Ascalonians died that day, and thousands more fled before the charr invasion. Gwen wandered alone in the wreckage of a nation searching desperately for the hand of a friend. Instead, she found the charr. More to the point, they found her.

The charr did not kill young humans. They enslaved them. For seven long years, Gwen toiled under the constant lash of her taskmasters. As fellow prisoners broke under the strain or were slaughtered out of hand, the embers of fear in her soul sparked into a blaze of hatred. When she finally saw her chance, Gwen fled into the wilderness, vowing never to be enslaved again. She did not make it far...the charr recaptured her easily. They judged her useless to them. She should have been slain on the spot, but her captors decided she could serve them, at least one more time, as entertainment.

The charr built arenas within their military camps dedicated to the glory of the legions. Inside these cruel stadiums they set unarmed humans against wild creatures, revelling in the blood sport and applauding as the beasts disembowelled helpless humans. Gwen was just another prisoner in a holding pen awaiting a brutal death for mere amusement and prayed for the strength to endure her ordeal and a chance to strike back.

Gwen defeated the charr's pet monster through guile and good aim, and escaped into a maze of tunnels beneath northern Ascalon. In those ruins she found more evidence of the charr's handiwork...the entombed remains of years of death matches. In the depths of this abattoir she also discovered power, in the form of mesmer spells within the journals of a long-dead researcher.

Stronger for her ordeal, but still alone in the heart of charr territory, Gwen set her sights on the distant mountains and the promise of freedom they offered from the pursuing warbands. She knew that if she were caught again, her death would be slow and painful. She would not be given the luxury of a merciful execution. Gwen's prayers were answered when she stumbled upon a group of free humans, a squad of Ascalonian soldiers operating deep behind enemy lines. They called themselves the Ebon Vanguard and their leader was Captain Langmar, a seasoned veteran.

Gwen joined the Ebon Vanguard and served them well. Years of forced labor and punishments turned this innocent girl into a ruthless woman, her hands guided by rage and a deep fear of her captors. Over time she learned to cope with her emotions. She learned when to strike and when to hold back. In her short life, Gwen had known hatred as well as mercy, and knew when to choose between the two. She became a true champion of Ascalon.[1] 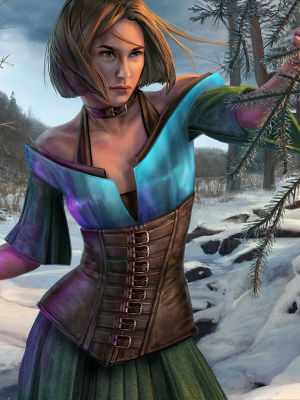 Gwen during the campaign against the Great Destroyer in 1078 AE.

When Destroyers began appearing in the Depths of Tyria in 1078 AE, the dwarf Ogden Stonehealer traveled north in the company of various heroes to find allies to fight back the invading menace. At the Eye of the North, he found Gwen, who had temporary command of the Ebon Vanguard while Captain Langmar was on a mission in the Blood Legion Homelands.

Langmar's return was long overdue, however, and a worried Gwen led a small force into charr territory, freeing the rebellious charr Pyre Fierceshot from Flame Legion captivity and kickstarting the charr rebellion in the process. During this time she learned to tolerate and trust Pyre and his warband and came to see that not all charr were enemies to be slain, although she made it clear to him that she did not fear but hate his kind. This amused the impressed Pyre, who would form a friendship with the belligerent human. Later, Gwen aided the dwarves against the Destroyers, and was present for the defeat of the Great Destroyer, champion of the Elder Dragon Primordus. Around this time Gwen visited the Underworld where she had a chance to speak with the ghost of her mother Sarah, who offered her advice and allowed her closure so she could move on.

Gwen attained command of the Ebon Vanguard during the Krytan Civil War, when Captain Langmar traveled to Kryta with the Ebon Falcons (the leader of whom, Lieutenant Keiran Thackeray, she was romantically involved with) to come to the aid of Ascalon's former enemy. When the White Mantle marched on Lion's Arch, Langmar escorted the necromancer Livia, and the asura pair Blimm and Zinn into the city, but lost her life to the mursaat near the Ascalon Settlement.

Gwen, now in command of the Ebon Vanguard, led a search for Captain Langmar and Lieutenant Kieran Thackeray, who had also gone missing in the fighting, and eventually learned of Langmar's death and rescued Keiran. She had slowly come to realize her growing feelings for the lieutenant and that out of all the horrors she faced in her life, nothing had scared her so much as the thought of being happy. Gwen accepted Keiran's wedding proposal after their reunion, and they were wed in the presence of long-time allies and friends at Olafstead with the norn Olaf Olafson acting as the vow master to make their union official. Some time after the wedding, Gwen returned to the Underworld to present her husband to the ghost of Sara who was both happy and surprised to see her daughter all grown up and approved of the couple's union.

In 1080 AE, 10 years after the Searing, King Adelbern recalled the Ebon Vanguard to Ascalon City, where they were given a heroes' welcome. They were redeployed to the mountains separating Ascalon from the Crystal Desert to guard against a dire threat the king warned was coming. On the journey, they lost many soldiers and civilians to charr. When they found their destination, an old mining town at the mouth of the mountain pass, they began to build what would become the stronghold of Ebonhawke. When the Kingdom of Ascalon finally gasped its last breath in the Foefire, Ebonhawke was just out of reach, leaving Gwen's people the last humans in Ascalon.[2] The decades Gwen spent in defending Ebonhawke earned her the title "The Goremonger" and a legendary reputation among the besieging charr who both hated and feared her.

Gwen eventually passed away and was buried in Ebonhawke which would be inspired by her dedication and withstand the charr siege for decades to come. Her grave can be visited in the stronghold's graveyard, Defender's Field, to this day. Her deeds were written about in Gwen's Story which inspired future generations to show courage at the face of adversity. One of Gwen's descendants, Logan Thackeray, would play a major role in the wars to come centuries later.

When the former god Dhuum broke free from his prison and began taking over the Hall of Chains in the Underworld, Gwen's soul could be found within the Ice Wastes. It is unclear if she had been in the Ice Wastes since her passing, or if she was there due to the conflict against Dhuum. Either way, she did not help in combating the former God of Death as she would vanish upon approach.

When the Elder Dragon Kralkatorrik invaded the Mists in 1331 AE, Gwen joined the dragon Glint's army of ghosts to combat the spreading Branded menace. In 1332 AE, she relayed a message from Glint to the Pact Commander that Kralkatorrik had been wounded in battle against Glint's forces, but had subsequently scattered the ghost army, invaded the Domain of the Lost and begun feasting on the souls there to regain power. After delivering the message, Gwen returned to the Mists.

Gwen would once again return to the lands of Tyria in 1332 AE when Aurene and the Pact Commander drove out Kralkatorrik from the Mists. As the Elder Dragon traversed through the domains of Melandru, Grenth and Balthazar, he dragged parts of their domains back into Tyria, and ultimately formed a new landmass called Dragonfall which he was buried under. Gwen and the Mist Wardens join the battle alongside the Pact and the Olmakhan by assisting Logan and Rytlock Brimstone in establishing a camp within Melandru's Lost Domain.

Commander, I was glad to see you made it out of Thunderhead Keep in one piece. It couldn't have been easy.

What can I do to help?

All right, I'll keep my eyes open for Melandru's Tears.
(during Clear a landing zone for the Pact)
The Pact sent over a new batch of ley magic reflectors, but they need to be tested first. You should also check in with the other camps, make sure they've got everything they need.

I'll help out with those reflector tests where I can.

No. I didn't even really think about it, since Aurene...

We were all shocked by what happened. Except Glint, though now I know why. But now Aurene is back, and we actually have a chance to end this.

Then let's make it count.

How is it working with Logan and Rytlock?

Logan is a strong leader, and I'm glad to see the Thackeray name is still well respected across Tyria after all these years. As for the charr? The charr is...tolerable.

Glad to see everyone's getting along.

From one fight to the next. Let's keep at it.