The Dream is a nightmare. See the world for what it is—episodes of pain ending in untimely death.

Grand Duchess Faolain is a sylvari Firstborn of the Cycle of Dusk.[1] She is the leader of the Nightmare Court, having succeeded its founder Cadeyrn at an unknown time. Faolain emerged from the Pale Tree with Caithe. Faolain had been all about questions, and Caithe had been all about answers. They were dear to each other and set out together to explore the world. But Caithe's spirit had grown straight and true like a young tree while Faolain's had grown twisted like a poison-ivy vine. When the pair encountered a great darkness, Caithe pulled back from it, while Faolain embraced it. The two have been separated since, but the Grand Duchess has vowed that Caithe will return to her in time, and so often shadows her beloved, armed with pleas and temptations.

When the sylvari race was young, most of the Firstborn stayed to tend the Pale Tree, but Caithe and Faolain dared to see the world. Over time, they established a deep bond and became lovers. During their excursion to Orr, they encountered a great darkness—the Nightmare—which Faolain ended up embracing while Caithe rejected it, thus leading to the beginnings of a rift forming between the pair.

In 1304 AE, the Firstborn witnessed the awakening of a new generation who would be known as Secondborn. In these early times, Faolain had taken on an apprentice, Sariel.[2]

As Grand Duchess of the Nightmare Court, Faolain took to recruiting various noble and well known sylvari, among these being Brangoire and her former apprentice Sariel, whom she eventually took as a lover.[4]

In 1319 AE, Faolain followed Caithe to a burning village that had been overrun by the Elder Dragon Primordus's Destroyers. There, she performed a dark ritual involving blood magic to poison Caithe. As Caithe fought the Nightmare, the poison spread and would eventually leave her no choice but to join Faolain, or die.

As Caithe joined Destiny's Edge which grew in fame, Faolain stalked the group, attempting to bring Caithe into the fold. Meanwhile, the Nightmare Court noticed the dragon champion Glint preparing for the awakening of her master, the Elder Dragon Kralkatorrik. Caithe begged Faolain to take the poison from her so that she could fight the dragon, and in the end Faolain acquiesced, taking the corruption into herself and rotting her hand. During this time, Faolain was described as having black leafy hair, eyes, and nails; being a dark contrast to Caithe.[5]

In 1325 AE, Caithe headed to the Nightmare Court lair of Twilight Arbor to investigate the kidnapping of local sylvari. She attempted to bring Logan Thackeray and Rytlock Brimstone with her, but the two would not cooperate for long enough to get anything done. Without their help, she was still able to put an end to Faolain's plans with the Pact Commander's help, driving the Grand Duchess out of Twilight Arbor. With Faolain's departure, several prominent courtiers—Count Leurent and Countesses Fyonna and Vevina—began competing for control of the Arbor and the Nightmare Tree within it.

Faolain's whereabouts and what she did after her departure from Twilight Arbor remained unknown. In her absence the Nightmare Court continued to splinter into factions like the Toxic Court with new claimants like Duchess Chrysanthea becoming prominent.

Later that year, the Pact Commander and Trahearne journeyed into the Dream with the Pale Tree's help to witness a vision of a dark future in Orr that might come to pass if they failed to bring Destiny's Edge together to battle the Elder Dragons. While in the vision, they witnessed a scene between Caithe and Faolain where Caithe, having become depressed over failing to reunite Destiny's Edge, ultimately chose to join Faolain's side in the Nightmare. 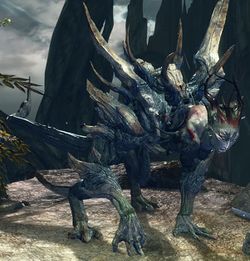 Appearance after being corrupted by Mordremoth.

In 1328 AE, Faolain journeyed to the Heart of Maguuma and was captured by the Elder Dragon Mordremoth along with other Nightmare Courtiers. She was imprisoned in a cage along with Eir Stegalkin in Verdant Brink while other captured survivors from the Pact fleet's crash—Logan, Trahearne and Zojja—were taken deeper into the jungle. When questioned by the Pact Commander who had come to free Eir and track down the rest of the missing Destiny's Edge, Faolain demanded to be released and claimed that the Nightmare Court wanted nothing to do with Mordremoth as they felt the Elder Dragon's yoke being even more onerous than the Pale Tree's.

After being freed by the Commander, Eir and Faolain were hunted down by a pair of powerful Mordrem Vinetooth, newly created minions of Mordremoth. While fleeing, Faolain stumbled and was helped up by Eir. At that moment the Grand Duchess noticed a Vinetooth stalking them in the canopy and chose to distract the beast by wounding Eir with a thorn in order to get away safely herself. However, in an ironic twist Eir threw the thorn that Faolain had stabbed her with, hitting the Grand Duchess on the back and making her stumble. While the wounded Faolain tried to get the thorn out of her back, one Vinetooth targeted Faolain first and pierced her with its tail in a seemingly fatal strike before taking her away while another Vinetooth attacked Eir and the rest of the party.

However, Faolain had survived the attack and was converted into a powerful Mordrem beast resembling the Vinetooth that had taken her. She reappeared in Auric Basin trying to fool Caithe—who was carrying Glint's Egg—to hand the egg over to her. The timely arrival of the Pact Commander's party prevented this from happening, and Faolain failed to stop the Commander from taking the egg to the safety of Tarir where the Exalted would protect it from the Mordrem.

Faolain continued to antagonize the Commander's party several times as they pushed their way to Mordremoth. She taunted both Caithe about the sylvari's destiny as their creator Mordremoth's servants and Braham Eirsson about Mordremoth causing the death of his mother Eir. She unleashed improved Mordrem based on Logan and Zojja on the party but in vain as the party successfully defeated the Mordrem and saved the severely weakened Logan and Zojja from blighting pods. After a long chase, the party cornered Faolain at the Heart of Thorns in the Dragon's Domain and slew her with Caithe having come to terms with putting her former lover to rest in order to end Mordremoth's hold over her.

Anomaly:
In Bitter Harvest, Faolain's skill "Enflame" is labeled as being used by Salazan in the combat log.