Invoke the power of the legendary dragon Glint. — In-game description

Invoke the power of the legendary dragon Glint.

All skills in the Legendary Dragon Stance have two parts. The first half of the skill is an upkeep skill which drains resources. The second half of each skill blasts the facet to release the energy. 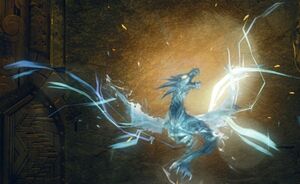 The image of Glint shown when activating the stance

Traits that allow use of Legendary Dragon Stance[edit]

Upon activating Dragon Stance
Glint: It has been too long, allow me to act!

Glint: Our moment has finally come!

Glint was a champion and scion of the Elder Dragon Kralkatorrik. After the Forgotten had purified her from Kralkatorrik's corruption, she began empathizing with other races and turned against her master.