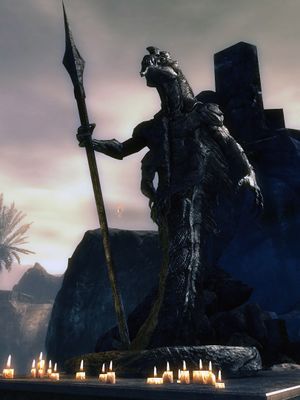 A statue of a Forgotten in the Desolation.

My ashes were to cast in stone in defiance of the Elder Dragons and their corruption, so that I may impact this message: Glint's legacy is essential to Tyria's survival.

The Forgotten may not live to see it unfold. We created the Exalted to act and bear witness in our stead.

If all our efforts cannot save Tyria, the peoples of this world must come together to complete Glint's legacy. Balance must be restored.

The Forgotten were an ancient race of serpents associated with both the dragon champion Glint and the Six Human Gods. They are assumed to be extinct on Tyria, although some may still live in the Mists.

The Forgotten were upright serpents with four arms. Distinctly different from other Tyrian serpentine races like the krait and naga, the Forgotten originated from beyond the Mists.[1] They were devout followers of the Six Human Gods, and were said to be linked to the Facets that reflect the power of the Human Gods.[2]

Forgotten were extremely long-lived. Vissh Rakissh, for example, was alive in 1075 AE and yet was old enough to have witnessed the Margonite assault on the Gates of Heaven and Abaddon's defeat at the hands of the Five Gods first-hand.[3][4]

Section-stub. This key section of the article is incomplete. You can help the Guild Wars 2 Wiki by expanding it.
Reason: Expand lore on Forgotten culture.

Forgotten architecture tends to take one of two forms, but there are not many remaining examples of either. Most commonly seen (but also more weather-worn) are structures created out of sandstone.[3] Usually pillars, arches, or short structures digging into the ground, these often have hieroglyphic symbols carved on them.

Elsewhere, the Forgotten have created structures composed out of a material resembling gold[5] through their exalting rituals. These structures are always places of great significance, like the Hall of Ascension or Tarir, and curiously share designs with the Hall of Heroes in the center of the Rift. 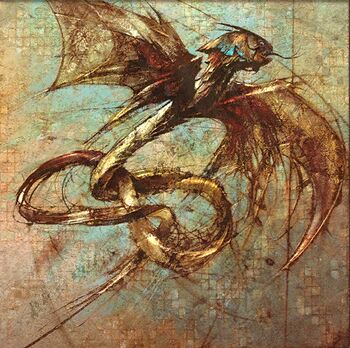 Ancient Ascalonian mural of the Forgotten.

Human legends claim that the Forgotten were originally brought to Tyria by the Six Gods in 1769 BE to serve as the world's custodians during the gods' reforming of the planet.[6] However, recent revelations about the history of the gods have cast parts of this account into doubt.

What is known is that the Forgotten were around during the Elder Dragons' last rise in 10,000 BE, and fought the eldritch beasts alongside the jotun, dwarves, mursaat, and Seers. During this time, they attempted—and failed—an assault on Zhaitan alongside the mursaat.[7] The Forgotten later freed Glint, then known as Glaust, from Kralkatorrik's control by utilizing an ancient and powerful ritual at the Altar of Glaust in Arah.[8][9] They had also discovered a type of magic which appeared impervious to draconic corruption and consumption. Guided by Glint, the Forgotten hid with the remaining jotun, dwarves, and Seers until the Elder Dragons went to sleep.

Afterwards, the Forgotten spread across the civilized world, guiding races towards rebuilding and prosperity. Archaeological evidence shows that the Forgotten were spread throughout Tyria as well as far as Cantha[10] when humans arrived on the world. They are known to have warred with the charr on the borders of the Blazeridge Mountains sometime in Tyria's past prior to 100 BE until they retreated, but otherwise their stewardship is thought to have been largely peaceful.[11]

In response to the Margonites defacing the Temple of the Six on the southern shore of the Crystal Sea in 1 BE, the Forgotten waged war and nearly wiped out the human seafaring nation. This, in turn, led to the war between Abaddon and the other five gods. When Abaddon was finally cast down, many of the Forgotten became his wardens, leaving Tyria to perform such duties in the Realm of Torment.

Exile to the Crystal Desert[edit]

The Forgotten that remained in Tyria continued to guide races the best that they could. However, eventually the spread of humanity became too great, and too much of their work had begun to unravel. As such, they retreated into the Crystal Desert in 174 AE. There, they devoted themselves to being custodians of Glint, overseers of the trials of Ascension, and to begin preparing for the Elder Dragons' next rise. They would not be heard from again for another 700 years.

In 868 AE, Turai Ossa took many Elonians north through the Desolation and into the Crystal Desert, believing himself to be the Chosen from the Flameseeker Prophecies and desiring Ascension. When they arrived, they had thought the Forgotten mindless beasts, much like the hydras and other wildlife that dominated the region, and attacked the serpents. The Forgotten retaliated in kind, and a war was raged that, along with internal divisions, wiped the pilgrims out.

200 years later, in 1072 AE, the Chosen from Ascalon arrived seeking Ascension. Guided by the ghosts of the Elonians, they met the Forgotten and fought them in the three trials of Thirsty River, Elona Reach, and Dunes of Despair, ultimately gaining access into Augury Rock and gaining Ascension.

The stirring of the Elder Dragon Primordus in 1078 AE brought a change to the Forgotten's plans. With the dwarves undergoing the Rite of the Great Dwarf, the Brotherhood of the Dragon that aided in protecting Glint's legacy was no more, replaced by the Zephyrites around 200 years ago. From this new group of humans, volunteers stepped forward to protect Glint's scions and eggs (including Vlast who had already hatched). Those who completed the trials the Forgotten set had their souls bound to animated Enchanted Armor, becoming Exalted.[12]

After creating the first Exalted, the Forgotten split into two groups. One group traveled to the Heart of Maguuma, searching for a place on the edge of Mordremoth's territory where they could protect Glint's last intact egg. This group remained within the Lost Precipice and Gilded Hollow for a time, before establishing the city of Tarir in the area now known as the Auric Basin. These Forgotten either died out or traveled to the Mists over 150 years ago, not knowing the fate of the others.[13] Shortly thereafter, the Exalted in Tarir went into hibernation to await the arrival of Glint's last egg.

The other group of Forgotten remained in the Crystal Desert, establishing the city of Kesho within their territory to house and nurture Vlast as he grew and continued to protect Augury Rock and the trials of Ascension, testing any who sought to follow in the footsteps of the Chosen.[citation needed] Even when Kesho was sunk beneath the sand due to Palawa Joko damming the Elon River to flow just south of Kesho, this group of Forgotten kept to themselves in solitude over the past 200 years.

When Kralkatorrik finally rose and killed Glint, the Forgotten of the Crystal Desert, led by Josso Essher, attempted to cleanse the Elder Dragon itself.[14] However, their attempt proved futile, for Kralkatorrik's hunger ran too deep, and they in turn became corrupted, spelling the end of all known Forgotten remaining in the world. Even as Branded, however, they held enough of their old selves to feel a connection to their duties, and gravitated toward Augury Rock while all other Branded traveled south to follow their new dragon master.

Lore discrepancy:
The Guild Wars Manuscripts says that, "Serpents arrive in Tyria" in 1769 BE. However, Warden Illyra claims that "Forgotten worked with Glint, who hid the old races from the dragons' power" during The Ruined City of Arah. Given that Varra Skylark claims that the Mystic Telescope shows that the Elder Dragons were last awake around ten thousand years ago (which is further corroborated by the Mursaat Lore Tablets, among other sources), it's not clear how both of these things can be true.