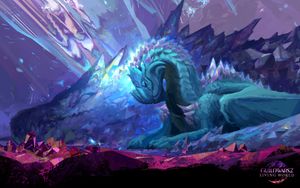 Aurene, a dragon, in front of Glint's corpse.

This article is about the species. For other uses, see Dragon (disambiguation).

Dragons are powerful creatures which come in many forms and live across Tyria. They are reptilian beasts connected to various elements, most commonly fire. Unrelated to the ancient Elder Dragons bound to the All,[1] most dragons are known as "lesser dragons" and include species like wyverns, drakes, hydras, saltsprays, and skyscales.[2] Some of them, such as skyscales, are capable of safely consuming magic unlike most mortals,[3] though others, like hydras, are not.[4] While some dragons, such as Glint and her scions, are capable of becoming Elder Dragons,[5][6] lesser dragons do not have this innate capability.[2] It is unclear what it is that separates those who could become Elder Dragons from the rest. Some asuran academics have suggested "glory" as a term of venery describing a group of dragons.[7]

According to human legend, dragons of all shapes, sizes, and origin had called Cantha home for thousands of years, since long before the human tribes of old joined to form the Empire of the Dragon that took them as its symbol.[8] The Luxons had many legends of the saltspray dragons. One tale told of a time ages ago when a dragon king made a pact with a shipwrecked captain. In exchange for wind and guidance, the captain guaranteed that no Luxon would cause harm to a saltspray dragon. To do so would bring terrible luck. That was before the saltspray dragons, with the exception of Albax, were corrupted by the Jade Wind which Shiro Tagachi's first death unleashed in 872 AE.[9][10]

After the Cataclysm of Orr in 1071 AE, the partial remains of a number of dragons were raised into undeath by Vizier Khilbron. In 1072 AE, a group of heroes were able to release the saltspray dragon Kuunavang from Shiro's corruption, and she repaid them by granting them powerful celestial magic with which to defeat the resurrected Shiro.

In 1075 AE, the heroes helped the mercenary Goren relocate a "sparkling rock" to the Key of Ahdashim. However, the rock turned out to be an egg from which a saltspray hatchling emerged. The hatchling attacked the party but was promptly defeated. Upon hearing the hatchling call him its mommy, however, Goren decided to adopt the hatchling and named it Shiny after his rock, looking after the young dragon alongside the djinn of Ahdashim.

The heroes met another young dragon, Glint's first scion Vlast, and defended him from invading destroyer minions of the Elder Dragon Primordus in Glint's Lair in 1078 AE.

As dragons of many shapes, sizes and origin exist on the world of Tyria, their respective powers vary considerably.

Saltspray dragons such as Shiny are able to understand and speak in Common shortly after hatching. Crystal dragons such as Aurene, however, seemingly need several years before they learn to communicate beyond chirps, roars, and telepathic visions.

Unlike most lesser dragons, saltsprays appear to have a greater variety of powerful magics at their disposal. Kuunavang is able to grant celestial skills on those she deems worthy, while Albax can grant good or bad luck or even revoke such boons on a whim.[10] 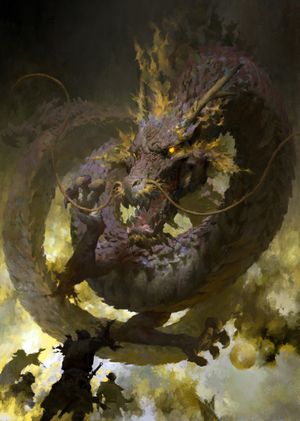 This concept art, which resembles Canthan depictions of dragons, was used for the Mini Mystical Dragon.