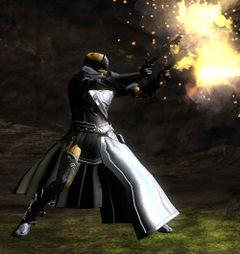 Summoned thieves are NPC summoned by the Thief profession when using Thieves Guild. Like most summoned allies they will follow their summoner and fight nearby hostiles until slain or their duration expires. Though the gender may vary, they are always the same race and level as their summoner. The male version wields two Bandit Revolvers and the female two Bandit Shivs. Both genders are dressed in full Sneakthief armor. Although they only have a small pool of skills to use in combat, each skill deals a fairly large amount of damage in comparison to the player.

Anomaly:
Although the female thief's melee attacks functions much like the Double strike chain, all her melee attacks are called Twisting Fang when seen in the combat log.
Summoned allies