Wolf (Spirit of the Wild)

This article is about the Spirit of the Wild. For other uses, see Wolf (disambiguation).

Spoiler alert: The following text contains spoilers relating to the personal story and The Icebrood Saga.

Walk with the pack. In the eyes of Wolf we are all brothers and sisters.

Wolf, also known as Spirit of Wolf, Wolf Spirit, and Great Wolf, is a Great Spirit of the Wild. He is revered by the norn, who build shrines and lodges to honor him. According to his Speaker, Fastulf Jotharsson, Wolf is dedicated to brotherhood and loyalty and is the bond that cannot be broken. He keeps people together in the face of impossible odds and reminds them that they need never fight alone.

As the Spirit of teamwork, friendship, family, and the embodiment of all wolves, Wolf is said to be dedicated to brotherhood as he imparts the virtues of loyalty, ferocity, and strength in numbers. He is revered as a masculine spirit, and the norn call him their brother, son, father, and uncle when they ask for his blessing.[1][2]

Following the Elder Dragon Jormag's awakening in 1165 AE, the norn tried to defend their lands in the Far Shiverpeaks from its corruption and destruction, but they were no match for the Ice Dragon. Wolf was one of the Spirits of the Wild who aided the norn in their exodus to the south.[3] It is said that he was one of the four Spirits—along with Bear, Raven, and Snow Leopard—who revealed themselves to the norn hero Asgeir Dragonrender over the field of battle after Jormag had devoured Owl and instructed him to lead the surviving norn south to a sanctuary while Ox, Eagle and Wolverine stayed behind to distract and battle the Ice Dragon.[4][5] Asgeir's personal journal, however, included additional information not known by the rest of the norn about the circumstances of him severing Jormag's fang and his reasons for leading the exodus south.

Thanks to his actions, Wolf became one of the four most highly regarded Spirits of the Wild and had the Wolf Lodge built in his honor in Hoelbrak. Although the four Spirits had worked together to help the norn survive Jormag's attacks, they—or their followers—were not always on the best of terms. Followers of Wolf scorn Snow Leopard's stealth as "cowardice," and the shamans of Bear are known to mistrust Raven's adherents, calling their deceptions dishonorable and weak.[1] Some norn like to speculate if Bear or Wolf would win in a fight while others deem such questions useless as comparing the two Spirits' respective strengths is like asking what would happen if the sun and the wind fought.[6]

In the past, Bear, Raven and Snow Leopard gave their respective blessings to Wolf's map which was in Captain Romke's possession. When the Spirits were invoked, the map could display everything between the traveler's current position and the destination they wanted to reach. However, the boastful norn crew's voyage came to a sudden end due to the Rising of Orr which was caused by the Elder Dragon Zhaitan's awakening in 1219 AE. The map was lost in the crew's battle against the Risen, and the slain crew members' ghosts were cursed to haunt the shores of Orr until the map was retrieved and the Spirits had forgiven the crew's pride.[7]

In 1325 AE, the Pact Commander and Trahearne retrieved Romke's lost map from Risen-infested waters and lifted the curse which had affected the crew's ghosts. As the map was brought to the grateful Romke, he was able to invoke the Spirits' magic on the map to help the pair locate the Artesian Waters while avatars of the four Great Spirits watched on in approval.

During the campaign against Jormag's forces in Bjora Marches in 1332 AE, the Vigil made a shocking discovery within the frigid, mountainous confines of Asgeir's Legacy: the personal journal of Asgeir Dragonrender himself. In the journal's pages, Asgeir revealed that he had had a private conversation with Jormag after rending the Elder Dragon's fang, and that Jormag had explained how its violent actions had only been a form of self defense. Jormag had come to view Asgeir as a worthy warrior and had realized how much he cared for the norn, so the Ice Dragon let him leave alive with a choice: Asgeir could return with more warriors and watch them all die as the dragon continued defending itself, or he could use the severed fang to convince the norn to move south and live in peace with Jormag promising not to follow them as it had come to view them as a race worthy of being preserved. Realizing that the norn would stand no chance against the Elder Dragon even with the enchantments of the jotun scroll and the blessings of the Spirits of the Wild, Asgeir had lied that the Spirits, not Jormag, had instructed him to lead the norn to a southern sanctuary. Despite believing that the lie had been necessary, Asgeir could not help but wonder if he had been tricked by Jormag to give up the fight and if he could have been capable of slaying the Elder Dragon; that uncertainty was a burden he would carry for the rest of his life.

In 1333 AE, Wolf summoned Eir Stegalkin's dire wolf Garm to Bjora Marches and sent him to look after Braham Eirsson who had ventured beyond Raven Pass to explore the harsh wilderness surrounding Drakkar Lake and find the missing Crecia Stoneglow and Rytlock Brimstone. Wolf appeared in spectral visions to the Pact Commander, who was searching for Braham, and led them to Garm so the pair could continue the search together.

Once the pair had located Braham, Crecia and Rytlock while beginning to befriend the wary kodan of Still Waters Speaking, Wolf called out to Garm who responded to him by leaving the safety of the kodan village for the depths of the Cerulean Hollows which contained the ruins of the once notable norn settlement of Sifhalla. Braham chased after Garm, only to come face to face with Wolf himself near the Spirit's shrine in Sifhalla. Wolf revealed to Braham that he had a plan to stop Drakkar, a champion who was acting as Jormag's mouthpiece to spread the Ice Dragon's corrupting whispers throughout the region, but required the Commander's and the Vigil leader Jhavi Jorasdottir's presence at the shrine as well. After the Commander and Jhavi had reached the shrine to rendezvous with Braham and Garm, Wolf revealed himself to them while recognizing the Commander's heroic deeds as worthy of the greatest norn legends.

Wolf explained that the kodan, though they were knowledgeable of the true extent of Drakkar's power, ignored the voices of the Spirits of the Wild and needed guidance for the trials ahead. He revealed that Braham, who had cracked Jormag's fang with Eir's bow which he had enchanted with the magic of an ancient jotun scroll, had fulfilled some of the conditions of an old prophecy and was now destined to either slay Jormag or be killed by the Elder Dragon. To stand a chance against Drakkar who was siphoning rejuvenating magic from both Jormag's profane idols and the Lost Spirits of Ox, Eagle, and Wolverine, the party needed to smash the idols while Braham needed to reach out to the corrupted Lost Spirits and demand them to give him their power for the coming battle by invoking his role in the prophecy. The Great Spirit also pointed out that Braham could only embrace his power to Become the Wolf once he had proven himself worthy by passing the Lost Spirits' trials which would test his resolve. Having said his piece, Wolf vanished and left the party to decide what approach to take to weaken and distract Drakkar while Braham began his spirit quest.

Once the preparations had been made and Braham had successfully earned the Lost Spirits' blessings, he accompanied the Commander, Crecia and Rytlock to face Drakkar in a cave where a squad led by Jhavi had cornered it into. After Braham had defeated Drakkar with the Lost Spirits' help and fought against the Whisper of Jormag which had come out of the beast, he spotted Blood Legion Imperator Bangar Ruinbringer and his subordinate Ryland Steelcatcher arriving at the scene to deliver the killing blow on the Whisper of Jormag which had nearly overcome the party with its alluring words. When Bangar shot the Commander with the bow he had stolen from Braham, the norn went from shock to pure rage as his defensive insticts kicked in. Having fulfilled the conditions that Wolf had set, he was finally able to transform into his wolf form as he attacked Bangar and Ryland, allowing Crecia and Rytlock to take the injured Commander to safety. After reuniting with the party in the Eye of the North and learning what had transpired in Drakkar's lair, Jhavi remarked that Braham had simply needed the push of seeing his friend in danger to embrace his totem Spirit's ability after fulfilling Wolf's request.[8]

Petitioners who seek Wolf's guidance often stop by at the Wolf Lodge. While there, they ask for advice from Wolf's shamans to perform specific ritualistic acts to improve their standing in the eyes of the Spirit. Wolf welcomes any prey taken during a hunt as an offering, but especially the prey that has proven challenging enough to require it to be slain by a pack.[2] 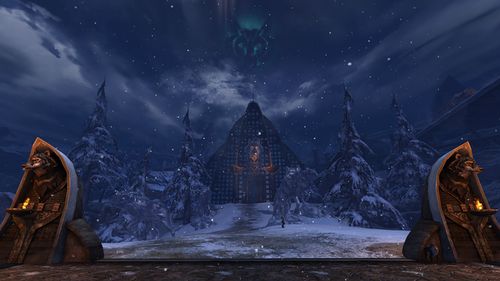