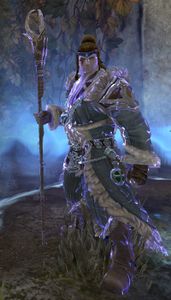 Now I understand Jormag isn't the real enemy. The Dragon killers are! You won't leave us again, Braham. You're going to stay forever.

Olar is one of Braham Eirsson's former guildmates from the norn guild called Destiny's Edge. After Braham's failure keep to his vow of defeating Jormag, Olar was influenced by the whispers in Bjora Marches, and he defected to the Sons of Svanir cause alongside another guildmate, Torrin.

In 1329 AE, Braham Eirsson fulfilled the norn prophecy by cracking the Fang of the Serpent with his mother Eir Stegalkin's longbow which had been enchanted with the fire magic of an ancient jotun scroll. Following his success, he made plans to rally the norn who celebrated him and take the fight to the Elder Dragon Jormag. During this time, he formed his own guild and named it Destiny's Edge to honor Eir's memory. Braham's charr friend Rox followed him to Hoelbrak and managed to convince him to instead take a scouting party north to assess the situation first before mobilizing a larger force.[1]

Braham and his guild—consisting of himself, Rox, the dire wolf Garm and the norn Alva, Olar and Torrin—headed north and fought Icebrood and Sons of Svanir along the way. During one skirmish, Olar threw himself in front of a Svanir sword to protect Braham's flank and received a scar on his left shoulder.

The guild eventually tracked down and surrounded Jormag, only to witness the Elder Dragon suddenly roaring in anguish and returning to the ice much to their confusion. Braham suspected that the Pact Commander had something to do with this turn of events and wrote a letter to their asuran friend Taimi inquiring about the matter. The norn put Braham under pressure to kill Jormag, and he felt he had to live up to Eir's legend and could no longer back down.[2]

Realizing they were unable to reach Jormag in its current state, the guild returned south. Angry and ashamed of his failure, Braham left the disappointed Alva, Olar and Torrin at Jora's Keep in Bjora Marches while heading back to Hoelbrak with Rox and Garm to think of a way to reach Jormag and finish the mission.[3][4][5] News of Braham's failure spread, and eventually the norn in the region, including Vigil members, began calling him Braham Vowbreaker for abandoning his guild's mission and being unable to deliver on his vow to defeat Jormag.

After General Almorra Soulkeeper visited Jora's Keep to inform the soldiers there about the Elder Dragon Kralkatorrik's demise in 1332 AE, the Sons of Svanir became more active and conducted raids throughout Bjora Marches under the orders of the Fraenir of Jormag. Those staying in the region began hearing strange whispers in their head that both reminded them of their failings and offered them salvation and peace through accepting the voice's offers. Olar, Torrin and several other male norn in the keep were influenced by the voices and eventually turned against Alva and the rest of the Vigil by opening the gates to let the Sons of Svanir in and killing Vigil soldiers in their sleep. Despite suffering many losses when the soldiers were alerted to their treachery, the Sons of Svanir and the traitors successfully killed Alva and most of the Vigil at the keep, taking Almorra and Warmaster Jhavi Jorasdottir captive.

Olar and Torrin were instructed to take the captive pair deeper into the wilderness so Jormag could begin influencing their minds and turn them against the Vigil. When Torrin grew annoyed at Almorra's taunts and intended to kill her, Olar had to remind him of their orders to stay his hand. While resting with the prisoners, Olar and Torrin noticed Almorra causing a distraction which allowed Jhavi to flee. Despite the general's best efforts, she was subdued, and Olar and Torrin eventually caught up to Jhavi and tied her up. Olar complimented Jhavi on using her wits like Raven while telling her that Almorra had killed her last dragon, suggesting they had permanently dealt with the defiant general in some manner.

Olar and Torrin took Jhavi to the Boneskinner Den in the Aberrant Forest and guarded her with their fellow Sons of Svanir while waiting for the whispers to break the warmaster's resolve. They witnessed Braham and the Pact Commander breaking into the cave and welcomed them with disparaging remarks. When Braham tried to reason with Olar, the influenced guildmate countered by stating that killing Elder Dragons was wrong and that the Sons of Svanir had given him and Torrin a new brotherhood and shown them that Jormag was not the enemy. Olar commanded the hiding Sons of Svanir to ambush the rescuers, only to witness the pair defeating the Sons and Torrin. Undeterred, Olar refused Braham's offers to stop and swore that he would not let Braham leave him again, forcing the pair to finish him off in order to save Jhavi.