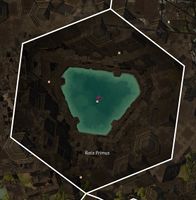 Rata Primus is a megacomplex of Inquest labs in the Sandswept Isles. It is divided between the giant floating cube and the Eastern and Western Complexes. The cube was inspired by Rata Sum's same size and layout.

The Inquest are overseeing a wide variety of experiments and developing new technologies in Rata Primus. The main cube is used for experiments involving the Scarab Plague samples (taken from Fahranur, the First City), new asura gates that do not require a receiving gate (technology developed from Gate Keno Decca Five, which in turn is based on Professor Portmatt's research), holographic soldiers (first developed by Elli and later utilized by Aetherblades), and possibly more.

Surface labs are focused around Kralkatorrik and the effects of absorbing other Elder Dragons' magic.

Inquest Engineer: Stay alert. There've been reports of increased Awakened attacks in the region.
Inquest Technician: Uh, boss, that's not our only problem. Or even our biggest.

Inquest Grenadier: Intruders! Do you think they know there's a Rata Primus shield generator here?
Inquest Extinguisher: If they didn't before, they do now, you ninny.