This article is about the world boss. For the event schedule, see Champion of the Ice Dragon. For the achievement category, see Drakkar (achievements).
Spoiler alert: The following text contains spoilers relating to The Icebrood Saga. 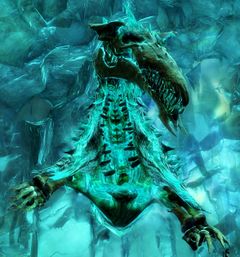 Jormag speaks. But Drakkar is its mouthpiece. The whispers radiate from it, like heat from the sun.

Drakkar is one of Jormag's oldest champions, originally seen frozen beneath the surface of Drakkar Lake. Despite being immobile and frozen, Drakkar was able to channel Jormag's power and abilities to whisper into the minds of those nearby. Since the most recent dragonrise, Drakkar has acted as Jormag's mouthpiece as it spreads the Ice Dragon's whispers throughout the Far Shiverpeaks.

Drakkar's early history is mostly unknown. It is believed to have served the Elder Dragon Jormag loyally during the previous dragonrise in a similar manner to recent years, acting as the Ice Dragon's mouthpiece and champion until it eventually ended up beneath the surface of the frozen Drakkar Lake in the Far Shiverpeaks.

While the norn siblings Svanir and Jora were hunting wolves in 1078 AE, their prey ran across Drakkar Lake. As they crossed the lake, the siblings paused, feeling an ancient, and bitter cold, power in the area. Svanir performed a simple spell to reveal the nature of the power they felt, which drew Drakkar's attention, and sent Jormag's power into the siblings. Jora resisted the power, and was in turn cursed, incapable of Becoming the Bear, while Svanir accepted the power and was transformed into the Nornbear who became a new champion of Jormag.[1][2][3]

It is unclear if Drakkar was conscious before Svanir's spell, but in the weeks following Svanir's corruption, the lake turned from a empty, barren place[1] to being full of Frozen Elementals and Chilling Wisps, and Myish, Lady of the Lake who patrolled directly over Drakkar's head.[4]

In the century after Svanir's death, other norn were drawn to Drakkar through promises of strength and power, over time forming the Sons of Svanir who viewed Svanir as their hero and martyr.[5] Drakkar used these norn to draw power and help Jormag awaken, allowing the Elder Ice Dragon to rise from its hibernation in 1165 AE.[2][6][7]

When Jormag woke from its slumber, it scattered the kodan Sanctuaries of the arctic seas and forced the norn to head south for survival. When this happened, Jormag had altered the landscape of the Far Shiverpeaks, flooding Drakkar Lake and sinking its surroundings. As the norn traveled south, four Spirits of the Wild remained to combat Jormag. Of these, Ox, Eagle, and Wolverine fell to Jormag's temptations over time, and began to empower Drakkar with their infinite magic. The spiritual protection from the Lost Spirits and the rejuvenating magic from the Sons of Svanir's profane idols of Jormag resulted in Drakkar effectively becoming immortal, too strong for anyone who tried to fight it.[8][9]

The new in-land sea created by Jormag's actions when it woke was then used by the kodan to escape Jormag's ravages in the north and flee towards Frostgorge Sound.[10] Not all kodan made it so far south, however, as the sea began to freeze around them,[11] stranding them in the Far Shiverpeaks. Among these kodan, one tribe was forced to make a new home around Drakkar's lair. While in the unfrozen waters, Drakkar's body was exposed to the elements and its body began to break down, exposing its bone and decomposing fat.[12] Drakkar remained in its re-frozen lake, spreading whispers through the ice. When the tribe of kodan came to naming their new village, they decided to call it Still Waters Speaking after the phenomena they had noticed about the lake.[11]

In the century since, Drakkar was slowly shifted by Jormag's power, twisting into a form the Ice Dragon desired.[13] In 1325 AE, the Elder Dragon Zhaitan was slain by the Pact, and Jormag received a part of its powers over death. This power influenced Drakkar as well, further altering its form,[14] with many of its bones and ribcage exposed, and growing ice spikes along its body. Later, the Pact Commander and their allies slew two more Elder Dragons, Mordremoth and Kralkatorrik, and with every Elder Dragon's death, Drakkar's power grew, and the whispers that were a murmur on the lake became loud and unbearable.[11] With Drakkar's increase in power, it began to slowly turn the stranded kodan of Still Waters Speaking against each other and into servitude of Jormag through its whispers.

While Jormag was recovering under the ice from the damage it had sustained from magic directed from Primordus via Taimi's Machine, Drakkar remained in the frozen lake of Bjora Marches to act as the Ice Dragon's mouthpiece so Jormag could communicate with the outside world and tempt beings in the Far Shiverpeaks to join its cause. Those who sought power listened to the whispers which guided them to Drakkar, and they were turned.[8][15]

The Pact Commander, Braham Eirsson, Crecia Stoneglow, Garm and Rytlock Brimstone entered the western half of Bjora Marches in 1333 AE and were soon followed by a Vigil squad led by Jora's great-granddaughter Jhavi Jorasdottir. While there, the party discovered that the whispers that had been plaguing the Far Shiverpeaks originated from Drakkar whom Jormag was using as a conduit. Cloudseeker, Claw of Still Waters Speaking, revealed how Drakkar was protected by the power of the three corrupted Lost Spirits. Unsure how to defeat the seemingly immortal champion, the party nevertheless resolved to find its weakness while aiding the kodan who were suffering from the whispers.

While looking for clues, Braham followed visions that led him to meet with Wolf, a Great Spirit of the Wild, who revealed that Drakkar could only be defeated if a norn of prophecy, who had cracked Jormag's severed fang, communicated with the Lost Spirits of the Wild and convinced them to lend him their power for the battle ahead. While Braham and the Commander focused on cleansing the shrines and passing the Lost Spirits' tests, Jhavi led the Vigil and the kodan to assault Drakkar in order to divert its attention from Braham and the Commander's actions.[16] On the way to Drakkar, Jhavi's forces heard Jormag whispering about how Drakkar was an innocent fighting in self-defense and how it was only trying to help the kodan and the norn. Jhavi told her allies not to listen to the whispers and instead called out to Drakkar, revealing how both Jora and Svanir were of her blood, and challenged the champion to face her and finish what had begun with her family long ago.

Although Jhavi's forces succeeded in driving Drakkar back after a fierce battle, they were unable to slay the champion as it hid in the ice and continued drawing magic from both the Jormag idols and the Lost Spirits to heal itself. After Braham had gained all the three Spirits' blessings, he met with Cloudseeker who realized that the party might have a chance to defeat Drakkar as long as they proceeded carefully. To further weaken Drakkar and prevent it from retreating into the ice again, Cloudseeker instructed the party to smash the idols that were rejuvenating the champion as well as push it away from the lake to a southern cave which had more rock than ice. Following the kodan's words, Jhavi led another assault on Drakkar and successfully lured it to the cave beneath the mountains where the Commander, Braham, Crecia and Rytlock were headed to finish it off.[9]

The party tracked Drakkar into its lair where the whispers tried to turn the party members against one another. Crecia and Rytlock fell to the whispers and attacked their companions, but the Commander successfully tricked them to direct their attacks on the icy walls of the lair instead to force Drakkar into the open. As the dragon champion emerged from the ice, Braham channeled the powers of Ox, Eagle, and Wolverine who manifested in the lair. Stripped of its magical protection, the weakened Drakkar was defeated in a blinding flash, and the redeemed Spirits vanished as the dragon champion drew its last breath. Following the demise of both Drakkar and the Whisper of Jormag, a piece of the Elder Dragon which had been using the champion as a conduit, the whispers that had been plaguing the Far Shiverpeaks stopped for the time being.

Section-stub. This key section of the article is incomplete. You can help the Guild Wars 2 Wiki by expanding it.
Reason: Expand with combat abilities from open world event.

During Voice in the Deep[edit]

Section-stub. This key section of the article is incomplete. You can help the Guild Wars 2 Wiki by expanding it.
Reason: Expand with combat abilities Voice in the Deep instance.