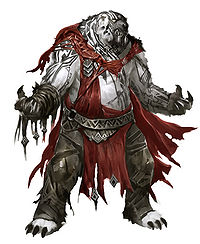 — Bitter Tears of Plenty, Voice of the Gentle Tide Sanctuary, The Wisdom and Power of the Kodan

The Voice of Koda is the spiritual leader and prime record-keeper of a kodan Sanctuary and is seen as the soul of a kodan community. Together with the Sanctuary's Claw of Koda, the Voice provides leadership through seeking and interpreting the will of their god, Koda, for the kodan. In interpreting the will of Koda, the Voice is all-knowing and blessed and has freedom from any error so the Voice might sanction laws and proclaim judgments on a grand scale.

The Voice is a spiritualist, chosen for their connection to Koda and their understanding of his will. Prior to taking on the role, they memorize the only record of all important happenings to the kodan of that Sanctuary from the current Voice. If possible, the new Voice is selected at the same time as the Claw to lead a Sanctuary. It is believed the fate of Voice and Claw are intertwined together and with that of the Sanctuary. If they are to retire they both retire at the same time; if either dies the other leaves their role.

In addition to maintaining the Sanctuary records, the Voice together with the Claw lead the kodan, often for several centuries. The Voice providing guidance for spiritual matters only, while the Claw attends to the physical. As part of their spiritual duties the Voice perform rituals and pathworking and keep their mind open to the Mists. The Voice is isolated and protected from the world, living in the heart of a Sanctuary in a ritual shrine to Koda attended only by a small staff of shamans. The isolation is to teach enlightenment and allows meditation on Koda's true wishes. Only the Claw may approach the Voice and ask for guidance. It is very rare to see a Voice outside of their ritual chambers.

It is not uncommon for a Voice to become unhinged due to the nature of their role and it is thought it is only through the will of Koda that a Voice remains grounded enough to fulfill their duty. Rarely a Voice goes completely insane - a sickness called the Rage of Koda. This starts a period known as a 'Time of Trial,' a test for the Sanctuary until the death of the Voice signals the purification and judgment of Koda.