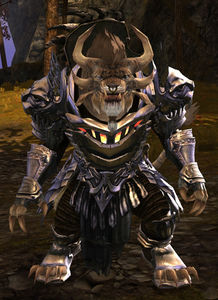 The day we run from the Flame Legion is the day we start forging wind-up toys instead of siege engines.

Smodur the Unflinching is the Imperator of the Iron Legion. He is a veteran of many battles and a brilliant engineer and architect, responsible for many advancements that have increased the Iron Legion's strength and influence in Ascalon. As Imperator, Smodur is among those who can interrogate, judge, and sentence prisoners of the Black Citadel.[1]

In the past, Smodur served together with Ambassador Steelcrusher on a tour of duty out on the Granite Front.[2] At some point Smodur lost one of his eyes; rumors claim that he tore it out in order to intimidate his opponent, which may have earned him the epithet "the Unflinching."[3] The Iron Imperator assigned Erracus the Wise as his aide-de-camp to help him organize his day-to-day items as he had trouble keeping his office from becoming a mess.

Smodur proved himself to be a just, determined and cunning Imperator who often acted as a mediator in arguments between the three High Legions in Ascalon.[4] Following the death of Ferro the Butcher, Tribune Bhuer Goreblade successfully petitioned Smodur to erect a statue in Ferro's honor in the Black Citadel.

During his tenure Smodur had to split his attention between incursions from the Flame Legion as well as the ever-present Ascalonian ghosts created by the Foefire, dividing his forces to deal with these threats. While he welcomed the presence of Ash Legion and Blood Legion reinforcements in Ascalon, he was well aware of the ambitions and ulterior motives of Imperators Malice Swordshadow and Bangar Ruinbringer and made it clear that the other two legions were just his guests while he would be in charge of the war effort in Ascalon.[5][6]

Smodur was considered by some to be the most progressive of all charr. He became part of the truce faction of the charr and worked on the Ebonhawke Treaty with the humans upon receiving the Claw of the Khan-Ur which a Vigil group led by Dougal Keane had retrieved from Ascalon City at the suggestion of Queen Jennah, General Almorra Soulkeeper and Imperator Malice Swordshadow in 1324 AE. When Ambassador Steelcrusher volunteered to be the head of the Iron Legion's delegation for the truce negotiations at Summit Peak, Smodur accepted his offer as the two charr knew each other well.[2] While seemingly acting purely out of noble interest, Smodur was also using the opportunity provided by the ceasefire to forge a stronger alliance with humans as a means to strengthen his position as Imperator in Ascalon.

Since the peace negotiations began, Smodur pulled the charr forces back from the gates of Ebonhawke, allowing humans to settle outside the stronghold's walls peacefully. By his decree, non-charr races were permitted to enter the Black Citadel, and human prisoners held in the Gladium Canton were set free and permitted to live in the Citadel if they chose to stay.

Following his acquiring of the Claw of the Khan-Ur, rumors ensued whether Smodur would use the Claw to further his own influence over the High Legions to become the new Khan-Ur, or if he was hoping to see the ancient artifact, and therefore the legacy of the Khan-Ur, destroyed. Smodur kept the Claw intact, however, and displayed it on his desk in the Imperator's Core by 1325 AE.[7]

Section-stub. This key section of the article is incomplete. You can help the Guild Wars 2 Wiki by expanding it.
Reason: Expand biography with events from personal story.

As Imperator, Smodur presided over the defense quorum held in the Black Citadel's Command Core where high-ranking officers from the three High Legions convened to discuss the threat posed by the Molten Alliance which had been assaulting settlements in Ascalon and the Shiverpeaks and kidnapping people in 1326 AE. The Molten Alliance was eventually driven back by the Pact Commander, Braham Eirsson and the gladium Rox, and the charr remained vigilant for future acts of aggression.

While gathering notable Tyrian leaders for a summit in the Grove to discuss the threat posed by the Elder Dragon Mordremoth, the Pact Commander was tasked by Rytlock to help him alleviate the burden of Smodur's concern over the Foefire so that the Imperator may attend the summit. Smodur showed apprehension at Rytlock's mission to cleanse the Foefire with an ancient ritual with the sword Sohothin and King Adelbern's crown, and called it a fool's errand. Despite his initial misgivings, the Imperator nevertheless accompanied Rytlock, Rox and the Commander to Old Duke's Estate as he was aware that Rytlock had accomplished seemingly impossible tasks before and was curious to see the outcome.

Although the attempted ritual diminished the number of Ascalonian ghosts, it did not cleanse the Foefire completely and temporarily opened a portal into the Mists where Sohothin fell into. When Rytlock entered the portal to chase after his sword which he knew was an integral part of the ritual, Rox tried to go after him before Smodur commanded her to stand down. Smodur agreed to attend the summit since the ghost problem, while not solved, was lessened by the group's efforts. He seemed confident that Rytlock would hold his own while trapped in the Mists, though Rox expressed worry. Before parting ways with the Commander and Rox, the Imperator told them to send Rytlock to the Black Citadel to explain what he had encountered in the Mists if they reunited with Rytlock before he did.

True to his word, Smodur attended the world summit where he voiced his concerns over dedicating soldiers and resources to combat Mordremoth when the charr already had many other threats such as Ascalonian ghosts and the Flame Legion to fight in Ascalon. After a brief debate with the Commander, however, he decided to participate in the discussions and listen to the other leaders' concerns out of respect for the Commander. However, the summit was interrupted by the sudden invasion of Mordrem led by the Shadow of the Dragon, which targeted the leaders and the Grove itself. After clearing the initial attack, the leaders were escorted to a portal cast by Kasmeer Meade which took them to safety to the lower level of the Grove while the Commander battled the Shadow of the Dragon which eventually fled.

Having witnessed the threat of the Mordrem first-hand, Smodur and his escorts helped the injured sylvari fight off the remaining Mordrem before departing back to the Black Citadel. The Imperator let the Commander know that he would have a strategy session with his tribunes to inform them of what had happened and then delegate one of his officers to work with the other races to assist the Pact in its war efforts against Mordremoth. Smodur provided forces and supplies to the Pact who had built a forward base in Camp Resolve, sending many charr with Marshal Trahearne to the Heart of Maguuma to take the fight to the Elder Dragon in 1328 AE. The Pact airship Sword of Smodur was named after him.

Smodur eventually learned of the destruction of the Pact Fleet, Mordremoth's demise, and Rytlock's return. When Rytlock continuously ignored summons from the brass at the Black Citadel who wanted to know more about his time in the Mists and his new revenant powers, he was stripped of his rank as tribune and charged with dereliction of duty. Members of the Adamant Guard were dispatched to Rata Novus to bring Rytlock back by force if necessary in 1329 AE. Rytlock acquiesced peacefully when confronted, however, and followed the Adamant Guard escort to the Black Citadel where he attended a closed-doors meeting where Smodur was likely present. Following the questioning, Rytlock's rank was reinstated, and he was released from custody with the details of the meeting being classified.[8]

In 1330 AE, the charr defended Ascalon from Awakened raiding parties which appeared out of strange portals. Smodur ordered the legions in Ascalon to stay on alert for subsequent Awakened invasion attempts. In 1332 AE, Smodur sent Iron Legion forces led by Tribune Mia Kindleshot to Thunderhead Peaks to assist the Pact, the Elonian alliance and the Pact Commander's dragon ally Aurene in the fight against Kralkatorrik. According to the Iron Imperator, the Iron Legion who had suffered from the Dragonbrand's effects needed to be present for the Crystal Dragon's fall.[9]

Section-stub. This key section of the article is incomplete. You can help the Guild Wars 2 Wiki by expanding it.
Reason: Expand biography with events from The Icebrood Saga.

In the Command Core
You don't belong here, <character race>. Move along, before I call a guard, or better yet, toss you out myself.

Moving along. Here I go. Sorry.

When completing Smodur's Blessing with the Warclaw mount
Nice mount.

When attempting to sit on Smodur's throne
Smodur the Unflinching doesn't move as you approach his chair, but you feel his eyes
[sic]
on you. The guards start reaching for their rifles.

During Rox: Critical Mission if completed Forging the Pact
What's a commander of the Pact doing here? I thought you had dragons to fight.

A little bird told me there was a battle brewing.

Well, it's true. We're planning a war. Your support would be welcomed.

The dragons will wait, for now.