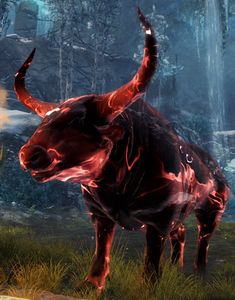 May my strength guide you to the victory I once sought.

Corrupted Ox Spirit (also known as Dolyak) is one of the lesser Spirits of the Wild, and the natural embodiment of all oxen,[1] who stayed behind to fight the Elder Dragon Jormag during the norn exodus. He is known for his teachings in strength and perseverance.[2] 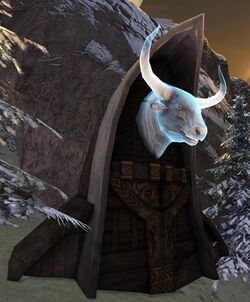 Shrine to Ox in Hoelbrak.

As the natural embodiment of all oxen,[1] Ox was revered as one of the Spirits of the Wild among the norn.

Following the Elder Dragon Jormag's awakening in 1165 AE, the norn tried to defend their lands in the Far Shiverpeaks from its corruption and destruction, but they were no match for the Ice Dragon. Ox was one of the Spirits of the Wild—alongside Eagle and Wolverine—who stayed behind after Owl's apparent demise and fought the Elder Dragon to give the norn the time to prepare for their exodus to the south.[3] The norn did not know what had happened to Ox since the exodus, and they revered him with great sorrow, along with the other Spirits who had stayed behind, at the dedicated shrines of Lost Spirits' Hallow in Hoelbrak.[4]

No norn had been blessed to serve as havroun to Ox in generations although it was unknown if this was because of Ox's potential demise in the battle against Jormag or because it was common for weaker Spirits, or those not close to the physical realm of Tyria, to be without a havroun.[2] Forgal Kernsson was the son of Kern, the last Dolyak Shaman.[5]

During the Vigil's exploration of Bjora Marches in 1332 AE, several Fallen creatures with a red aura—ranging from norn and kodan to local wildlife—were found roaming around various ruined shrines dedicated to the Spirits of the Wild in the Aberrant Forest and the Fallen Mountains. After learning that the Fallen were minions of Jormag, Researcher Yarixx found a way to manipulate their spirit essence of Resilience to turn them strong and weak against other minions of Jormag—the Aberrant and the Sons of Svanir—who had been infused with the essences of Valor and Vigilance related to other lost Spirits of the Wild. Beyond the Fallen's ties to Jormag and their spirit essence being related to Ox, the Vigil initially found no other clues about the ultimate fate of Ox.

As the years passed, the fleeing kodan of Still Waters Speaking who were stranded in Bjora Marches discovered the Lost Spirits' actual fate, however. Ox, Eagle and Wolverine had failed to defeat Jormag, and had been taken and corrupted via the Ice Dragon's tempting whispers which had offered them power. Drakkar, Jormag's champion, gained the corrupted Spirits' protection while it fed on their infinite well of magic.[6][7]

In 1333 AE, Wolf summoned Braham Eirsson, who had fulfilled the first part of a norn prophecy via cracking Jormag's impervious fang, to Sifhalla Ruins in Bjora Marches. There, the Great Spirit instructed Braham and his companions to travel to the corrupted Spirits' shrines and demand their power in order to use their magic against Drakkar and stop the far-reaching whispers, which were plaguing the Far Shiverpeaks, so Braham could become a true norn.

Braham fulfilled Wolf's quest by visiting the shrines. With the help of the Pact Commander, norn shamans and other adventurers who were dedicated to the Spirits, he was able to summon each of the Spirits so he could ask for their aid. Once the party had proven themselves in a test of strength to draw Ox to his shrine, the corrupted Spirit initially dismissed Braham as a weakling who had relied on the strength of others—his mother's bow and the magic of the jotun scroll—to crack the Ice Dragon's fang and how he was not worthy of his blessing. Braham countered Ox's argument by explaining that true victory came from sharing strength with others rather than hoarding it. Braham reminded Ox how the Spirit had chosen to submit under the will of Jormag and questioned if he was going to doom the norn to the same fate. Realizing the weight of Braham's words and his own fall, Ox relented and gave Braham his strength for the battle ahead.

After Braham had gained all the three Spirits' blessings and the Commander had smashed the idols of Jormag whose magic had been rejuvenating the dragon champion, the party tracked Drakkar into its lair where the whispers tried to turn the party members against one another. Crecia Stoneglow and Rytlock Brimstone fell to the whispers and attacked their companions, but the Pact Commander successfully tricked them to direct their attacks on the icy walls of the lair instead to force Drakkar into the open. As the dragon champion emerged from the ice, Braham channeled the powers of Ox, Eagle, and Wolverine who manifested in the lair. Stripped of its magical protection, Drakkar was defeated in a blinding flash, and the Lost Spirits vanished as the dragon champion drew its last breath.

Despite their victory over Drakkar, the corrupted Spirits were unable to wrestle free from Jormag's influence. Ox's Fallen minions continued fighting alongside the icebrood and the corrupted charr of the Frost Legion who had emerged in the Drizzlewood Coast.

Lore discrepancy:
According to A Spirit of Legend, the Spirit of Dolyak is also called Ox. However, the Shrine to Ox in Hoelbrak and Dolyak Totem in Angvar's Trove differ in appearance. (The first is a bull, while the second is a dolyak.) During the Icebrood Saga, Ox resembles a bull.