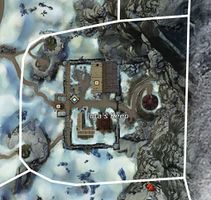 Jora's Keep is the local Vigil stronghold in Bjora Marches. It stands where the homestead of Jora herself once was.

Escort the relief crew to the Aberrant Forest (80)

Section-stub. This key section of the article is incomplete. You can help the Guild Wars 2 Wiki by expanding it.
Reason: Dialogue and NPC placement is dependent on mission progress. Added apparent story steps, needs verification.

Vigil Relief Crew (1): My sire died a long time ago... but I swear I could hear his voice in the pass.
Vigil Relief Crew (2): I heard someone singing. A lullaby from when I was little. Exactly how I remembered it.

Outside the keep, a trio of Vigil members arrive from the west and resume their patrol back to Spirits' Refuge
Vigil Marksman: Jhavi's been keeping Drakkar busy. To be that close to the source of the whispers... I don't know how she does it.
Vigil Recruit: Rage. She desires revenge. You know what Drakkar did to Svanir.
Vigil Crusader: Yes, the legends of Svanir have only grown more relevant these past weeks.
Vigil Marksman: They're not legends. They are a history we cannot repeat.
Vigil Crusader: Well, I know one thing at least: Jhavi's the last norn I'd want as a blood enemy.
Vigil Recruit: Ha! Yeah, never thought I'd say this, but I almost feel bad for Drakkar.
Vigil Marksman: Almost. Come on, let's stay focused.