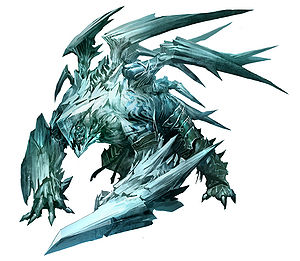 The icebrood are the minions of the Elder Ice Dragon Jormag. Many of them consist of beings, such as norn and kodan, that were turned into the fanatical minions by Jormag's champions, such as the Dragonspawn. Recently corrupted icebrood are merely covered in ice, still having blood in their bodies, while older icebrood are said to have frozen insides.

In early 1325 AE, a group of icebrood attacked a Lionguard haven, corrupting it and killing most of its inhabitants. The only survivor was the aged Bulsa the Elder. Just north of this area, a kodan was corrupted, having to be put down by his former friends.

In the Honor of the Waves, a sinking kodan sanctuary, several icebrood invaded, led by Kodan's Bane, Huntsman of Jormag. Caithe and Eir Stegalkin arrived to rescue the sanctuary's Voice of Koda, assisting Honor's Claw. As the group climbed up into the Honor of the Waves, a colossal shard of corrupted ice landed on the deck, splintering the wood and summoning a group of tough icebrood elementals with the ability to create rows of exploding frost. Though the shard fired shards of ice at the party, it was destroyed.

Afterwards, a powerful corrupted Svanir seer appeared alongside a tough icebrood troll with the ability to regenerate when harmed. It was slain by the group and shortly after, two tough icebrood colossi appeared at the door to the Voice's chambers. While battling the colossi, some tough icebrood goliath leading a pack of icebrood wolves appeared, attacking the group. All of the creatures were slain, however.

After defeating Kulag the Fallen, a Svanir champion, the group headed through a gate, battling with a powerful icebrood goliath. After slaying the goliath, the group went through the gate where they encountered Hirvela the Lost, an icebrood Son of Svanir. Hirvela attacked the group with his axes, and when weakened, transformed into a monstrosity resembling a treant. Hirvela was defeated shortly after, however, and the group proceeded onwards.

The next room of the sanctuary contained a wall of corrupted ice, which was then melted by a nearby brazier, despite the efforts of the tough icebrood wolves guarding it. Shards of ice appeared on the floor of the room, chilling anyone who touched them.

After continuing past Lani Winterfist, the group reached Honor's Voice, who was in the midst of pleading for Kodan's Bane to leave her be. Kodan's Bane soon corrupted the Voice, declaring that Jormag's blood was her blood and that she should receive Jormag's gift, transforming her into one of few known female icebrood. After a clash with her, she was slain, and the group proceeded to battle Kodan's Bane, who beseeched for Jormag to give him their power to and the Ice Dragon summoned a drake to aid him. The two were both slain, however, resulting in the sanctuary's temporary freedom from the Ice Dragon's corruption.

Soon after, Honor's Claw beseeched adventurers to aid him in purifying the sanctuary of icebrood, and after gathering the group, they entered the sanctuary. Honor's Claw explained that three of Kodan's Bane's underlings had escaped into the sanctuary: Ginva the Butcher, Sorge the Zealot and Wollam the Plunderer. He then asked the group which icebrood they would battle.

Around this time, Bjarl the Rampager was captured by Inquest in the Crucible of Eternity and was slain by Eir and Zojja.

In 1329 AE, the Pact Commander entered Bitterfrost Frontier, a region bordering the Sea of Desperation, where many icebrood and Sons of Svanir had gathered. Approaching the Svanir Hive, a base for the corrupted Svanir, they encountered a powerful icebrood Son of Svanir guarding the base, and shortly after, a powerful corrupted Svanir tyrant appeared and was soon slain after a fierce battle.

Entering a cave within the Bitter Cold, the Commander encountered an icebrood abomination imbued with Zhaitan's death spectrum and Mordremoth's plant spectrum and defeated it by harming it with corrupted grubs. It was conjectured by Taimi that Jormag had not received as much of Mordremoth and Zhaitan's magic as Primordus had, though this was later proven false.[1][2]

Within the Wayward Cave, several icebrood gathered, led by a powerful icebrood minotaur guarding an ancient jotun scroll. While Braham Eirsson and the Pact Commander battled it, it trampled its servants, revealing the scroll and allowing it to be killed.

In late 1332 AE, within the Darkrime Delves, several powerful creatures could be encountered, including an icebrood minotaur similar to the one seen in the Wayward Cave several years prior. It was battled by Ryland Steelcatcher and quickly slain.

While chasing Ryland Steelcatcher after Centurion Cinder Steeltemper's death, the Pact Commander encountered a corrupted version of Varinia Stormsounder, aided by several powerful icebrood and Blood Legion Imperator Bangar Ruinbringer's Frost Legion. The Pact Commander battled hordes of the icebrood and Dominion, and finally fought Varinia herself, slaying her after a fierce clash.