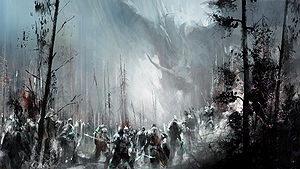 In 1165 AE, the Elder Ice Dragon Jormag arose in the far north beyond the Far Shiverpeaks. Creating a massive, bitter blizzard that lasted four years, Jormag marched south on the norn people.[1] The norn knew of the threat coming to face them and prepared for battle.[2] Despite this, the Elder Dragon battered the norn, killing them in the hundreds according to the norn skaalds,[3][4] and burying the northern passes. It shattered the Far Shiverpeaks, creating new inland seas.

Aided by the Spirits of the Wild and ancient jotun magic, a norn hunting party led by Asgeir Dragonrender fought and killed Jormag's greatest champion, Frostfang, and attacked Jormag directly at Volsung's Stead. Though his party were all killed, Asgeir had knocked out a tooth from Jormag's maw. The battle went on for days, and Asgeir reached the limit of his strength. Instead of killing Asgeir, Jormag communicated with him, offering a chance of survival—for himself and the norn people. Jormag offered its tooth, and suggested Asgeir lead them south and Jormag would not follow, having learned that the norn must be preserved. Asgeir knew the norn would not back down from a challenge, especially if they learned of Jormag's deal, and so Asgeir kept this a secret, only writing it down in his journal.

Four of the Spirits of the Wild knew as well that the norn would not survive a continued confrontation, and four of them—Bear, Raven, Snow Leopard, and Wolf—took to guiding the norn south. They led Asgeir to lowlands, where he would be tasked with building Hoelbrak, which in old norn tongue meant "lowlands".[1] These four Spirits became prominent figures within the norn culture, and were given the title "Great Spirits", whereas only Bear was predominant in norn culture before. Meanwhile, Ox, Owl, Wolverine and Eagle, having taken damage from Jormag's actions or being best suited to defend against it, stayed back to fight off the Elder Dragon. It is known that at least Owl has died during the battle against Jormag,[5][4] and the other three have been lost since. According to Owl Shaman Ulgadis, Owl was slain over Owl Lodge, while Skaald Stjarna's tale suggests that Owl died in the north before Asgeir led the norn to Hoelbrak. Three of the lost spirits are remembered in a shrine in Hoelbrak, the Lost Spirits' Hallow.