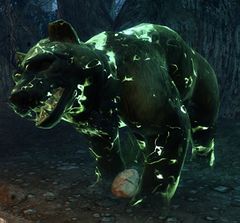 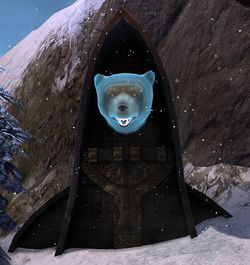 Shrine to Wolverine in Hoelbrak.

May my valor guide you to the victory I once sought.

Corrupted Wolverine Spirit is one of the lesser Spirits of the Wild, and the natural embodiment of all wolverines,[1] who stayed behind to fight the Elder Dragon Jormag during the norn exodus.

As the natural embodiment of all wolverines,[1] Wolverine was revered as one of the Spirits of the Wild among the norn.

Following the Elder Dragon Jormag's awakening in 1165 AE, the norn tried to defend their lands in the Far Shiverpeaks from its corruption and destruction, but they were no match for the Ice Dragon. Wolverine was one of the Spirits of the Wild—alongside Ox and Eagle—who stayed behind after Owl's apparent demise and fought the Elder Dragon to give the norn the time to prepare for their exodus to the south.[2] The norn did not know what had happened to Wolverine since the exodus, and the Spirit was revered with great sorrow, along with the other Spirits who had stayed behind, at the dedicated shrines of Lost Spirits' Hallow in Hoelbrak.[3]

No norn had been blessed to serve as havroun to Wolverine in generations although it was unknown if this was because of Wolverine's demise or because it was common for weaker Spirits, or those not close to the physical realm of Tyria, to be without a havroun.[4]

During the Vigil's exploration of Bjora Marches in 1332 AE, several Aberrant creatures with a green aura—ranging from Vigil members to local wildlife—were found roaming around various magically potent locations such as the Aberrant Forest and the Ravenfrost Caverns. In the latter area, Sons of Svanir necromancers were conducting macabre rituals on victims with Ritual Anchors and turning the summoned spirits into hostile Aberrant.

After learning that the Aberrant were minions of Jormag, Researcher Yarixx found a way to manipulate their spirit essence of Valor to turn them strong and weak against other minions of Jormag—Fallen and the Sons of Svanir—who had been infused with the essences of Resilience and Vigilance related to other lost Spirits of the Wild. Beyond the existence of the Aberrant and their ties to Jormag, there was no other clue about the ultimate fate of Wolverine.

Voice in the Deep (as an ally)[edit]