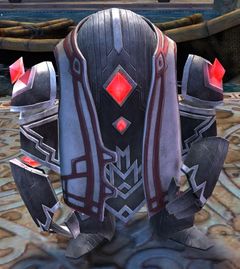 Life as a machine is incomprehensible to living beings.

Blish is an asuran portal specialist, the older brother of Gorrik[1], and a college friend of Taimi's. He has transferred his consciousness into a Mark I Golemite body.

Blish is a member of the College of Synergetics like Taimi and had gotten to know her during their studies. It is hinted that, similar to Taimi's degenerative disease, he suffered from a disease that would prove fatal in time.

During Taimi's time in the Heart of Maguuma, Blish and his brother Gorrik joined the Inquest. Blish eventually transferred his consciousness into a Mark I Golemite body. This technology was developed by the Inquest, but until the M.I.G. project by Hronk's krewe, always proved fatal. Due to the generic appearance of his golem body, Blish wore a lab coat to distinguish himself.

In 1331 AE, Blish and Gorrik were working at Rata Primus on the Scarab Plague samples taken from Fahranur, the First City and discovered the Awakened invasion that was being covered up by the megacomplex's upper echelons. They took it upon themselves to send out distress signals and barricade the plague samples, as well as attempted to tamper with the Primus gate network that allowed travel without a receiving gate in order to hamper with Awakened attempts to use the gates for their own purposes.

Blish and Gorrik were contacted by the Pact Commander and Braham Eirsson who had spearheaded an Olmakhan assault on Rata Primus to investigate what the Awakened and Inquest were up to. Blish was surprised to hear Taimi's voice coming out of the Commander's personal remote communicator but quickly set the surprise aside as the brothers instructed the team where to find the gate hub so it could be shut down.

The brothers kept Awakened invaders from reaching the bottom lab and hid there long enough for the Commander and Braham to come to the rescue. Blish introduced himself to the newcomers, but before Taimi could inquire why his voice sounded different, the Commander suggested that they keep the reveal of Blish being a golem from Taimi until after they had reunited with her in person. Blish and Gorrik revealed that the Awakened presence had triggered the decontamination protocol which would make the complex self-destruct with no way of stopping it.

Teaming up with the Commander, they rushed to the vaults containing the plague samples, only to discover the samples had already been taken. They headed for the gate hub next, witnessing Palawa Joko and Commander Lonai in possession of the samples and about to flee through an asura gate. Joko taunted the Commander by promising to unleash the Scarab Plague on Central Tyria before entering the portal with the samples, leaving Lonai behind to deal with the group. During the resulting clash the gate, which Joko had tampered with to prevent anyone from pursuing him, began malfunctioning and sucked the Commander, Braham and Lonai in.

Blish and Gorrik began working on the gate to stabilize it and return the Commander and Braham from wherever the gate had sent them, using Lonai's energy signature to direct a portal to the trio's location. However, the attempts failed at first as the battling trio were being teleported around Tyria before they ended up in an unknown location somewhere in the Mists where Lonai was finally defeated. The brothers were ultimately successful in teleporting the Commander and Braham aboard Sayida the Sly's airship outside of Rata Primus and fled the complex with Gorrik's pets just as it was destroyed in an explosion.

After reuniting with Blish, Taimi expressed fascination with his condition, a welcomed change to the usual disgust or horror the brothers had seen. Blish was happy to be with Taimi again, admitting that he had missed her mind. He revealed that he had managed to back up Inquest data on the Scarab Plague and the Elder Dragon Kralkatorrik, and Gorrik warmed up to the idea of working with Taimi as long as they discussed authorship hierarchy for any published research and stipulated that Taimi did not have supervisory authority.

After traveling to the Free City of Amnoon, Blish and Gorrik began researching the Scarab Plague. Gorrik discovered that the scarabs only infected humans and planted Petey, another species of beetle, under his skin to test another theory of his, but locals discovered what he was up to and arrested him after mistaking him for planning to unleash some pestilence in the city. While Gorrik was put on trial, the Cavaliers impounded his materials at the docks, including Blish who was shoved into one of the crates with his neural net cut off.

After the Commander and Taimi had helped clear the charges against Gorrik, the trio went to the docks and eventually found Blish. Upon being rebooted, Blish returned to consciousness with a horrified scream, letting his companions know of his lack of sensory experiences in what he described as nothingness while he had been shut down. Taimi and Gorrik hastily promised never to let him experience that kind of state again and monitored him while the Commander left them to meet with Lord Faren and Councilor Mayameen who were waiting for a Tyrian supply ship to arrive at the docks.

Blish, Gorrik and Taimi went to the docks later and learned that the Commander had barely prevented an outbreak of the first generation of Scarab Plague carried by the crew of the supply ship whom Joko had secretly infected. Upon realizing that Joko was breeding a more potent third generation of scarabs, which would be ready to be unleashed on Elona and Tyria in a mere few days, and that Joko's stronghold in the Domain of Kourna would take weeks to reach, Blish offered a faster way to reach their destination. He had a portable base prototype of the gate system, which Joko had used earlier to send Awakened invasion forces to Tyria, and could calibrate an instant entry point to Kourna behind enemy lines. Seeing the benefits of Blish's suggestion, the Commander asked him to set up a portal near the Tomb of the Primeval Kings as they would need help from all the people sympathetic to their cause in Elona, including the ghosts, if they were to fight through Joko's army to get to Joko himself.

Upon setting up the portal, Blish lost his arm into it, and the Commander followed it to Kourna. The portal closed soon after, and Blish began working on stabilizing it to turn it big enough for their allied army to get through safely. Blish was able to continue communicating with the Commander and instructed them to use the gadgets on his severed golem arm during the scouting mission. He turned the portal into a permanent rift and sent in troops in waves at the Commander's suggestion.

Upon entering Kourna through the rift, Blish participated in securing the area with the rest of allies, turning the overtaken garrison and its nearby holdings into the Allied Encampment. After listening to the Commander addressing the gathered allied army, Blish asked to have his arm back and began working on reattaching it to his golem body. While staying in the allied base, Blish witnessed the Commander, Gorrik and Taimi discuss Petey's recent growth spurt and how this roller beetle could be used against the scarabs if properly mutated and incubated. He helped build a saddle for Petey after having received relevant parts and schematics for it from the Commander who scoured Kourna for them.

Blish continued working on his arm during the Battle of Gandara which ultimately led to the deaths of Palawa Joko and the third generation Scarab Plague. Once he had fully repaired his golem body, he focused on keeping an eye on the rift near the allied base and began wondering whether it had been a wise idea to rip a hole in the fabric of space-time as it could have unforeseen effects on Tyria.[2]

In Allied Encampment, after unlocking the Beetle Saddle achievement
A saddle would be incredibly simple for me to build. Just bring me all the parts.

I've given you a list. I even titled it "Beetle Saddle."

In Allied Encampment, during Beetle Saddle if the player has all of the necessary items
Excellent. Give me just a moment and I'll have your saddle ready.