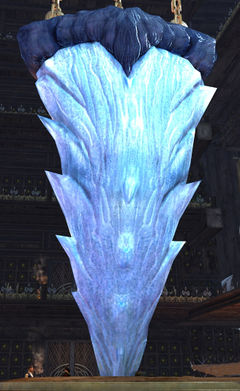 You have heard great tales of us, of the ones who slew Jormag's champion. But we did this thing only to weaken the dragon himself. I've come here tonight to see if he is weak enough that we can face him.

The Fang of the Serpent is the central feature of the Great Lodge. This tooth of Jormag was knocked out by the great hero Asgeir Dragonrender and brought down to Hoelbrak during the norn's exodus from the north. It was chained to the ceiling from the gum at the root of the tooth, and left as both a testament to the only norn to harm the Elder Dragon and as a challenge to all norn of the future.

It is believed far and wide by the norn that if none can damage the fang in any form, the norn have no hope of facing and defeating Jormag themself. As such, youthful norn use the fang to test their mettle, to prove if they would be the one who leads their people to victory. Though countless attempts have been made, none have succeeded in over 100 years. Over time, many norn - especially the older norn like Ulf - see the fang as less a barrier to surpass and more a deterrent to keep the brash norn from charging to their deaths, hoping that the fang never breaks and seeing no reason to believe damaging a tooth means being able to damage Jormag itself. Others, however, believe that they should not wait for the tooth to be broken and march north regardless, seeing Jormag as a threat that would not idly wait for foes to meet territory. Still other norn, such as Mattul Krigheset, wish to use the tooth itself against Jormag, setting indestructible against indestructible.

In 1319 AE, Destiny's Edge attempted to break the tooth after destroying the Dragonspawn, a powerful champion of Jormag in its southern territory. Eir used axes enhanced by Wolf as well as her personal chisel and mallet, and even using her Bear Form. Afterwards, Rytlock Brimstone (with Sohothin) and Logan Thackeray offered to attempt but were held back by Eir. Caithe and Zojja both withheld any offer, the former knowing of the power of the Elder Dragons and seeing the attempt as futile while the latter finding it absurd the norn could believe that physical attacks would do anything against a magical creature.

In 1320 AE, the famous smith Beigarth rediscovered a means to craft Deldrimor Steel and intended to craft a weapon that may break Jormag's tooth. Though the weapon was forged, no known attempt was made on the tooth itself.