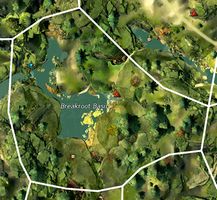 Breakroot Basin is the central area of southern Drizzlewood Coast. Previously containing a hidden outpost for the Dominion forces, now a camp for the United Legions has been established here.

Inside the United Legions camp
Iron Legion Engineer: I'm the last one in my warband who hasn't defected.
Ash Legion Scout: When did they leave?
Iron Legion Engineer: Little over a week ago. I know the legions are supposed to be in this together, but I feel...really alone.
Ash Legion Scout: Being out here doesn't help. Makes everything seem emptier... Just keep moving forward. That's all we can do.

Section-stub. This key section of the article is incomplete. You can help the Guild Wars 2 Wiki by expanding it.
Reason: Check if there are any related achievements in the area. If not, remove section.