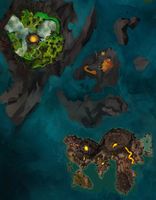 Map of Ring of Fire

The Ring of Fire is a group of volcanic islands just south of the Tarnished Coast. The large volcano at the center of the ring, called Abaddon's Mouth, is where the Six Gods dropped the Bloodstones before leaving Tyria for good in Year 0. A few hundred years later, the volcano erupted and sent the five Bloodstones into different direction across Central Tyria, one of them landing back in the caldera. The island has remained active ever since.

At the caldera of Abaddon's Mouth, not far from the Bloodstone, lies the Door of Komalie, which leads to the Realm of Torment. The landscape of the islands is dark and jagged, with the lava solidifying into monstrous skulls and other shapes due to malevolent energies across the islands, which is most likely the presence of the Realm of Torment seeping through the Door of Komalie.[1] Ships that pass by the Ring report hearing the tell-tale hiss of scalding hot lava hitting the ocean, instantly vaporizing the saltwater into steam.

The reefs off the islands are formed of black pumice stone. There are very few natural ports, and those that might be suitable for docking would bring the crew of the ship within danger of being caught by a sudden, unexpected eruption. There are also a series of mursaat ruins, including the infamous Onyx Gate, that remains untouched since the days of the Flameseeker Prophecies.

There are no longer any known settlements in the Ring of Fire since the mursaat were nearly wiped out by the Chosen and titans, and the islands were left dramatically reshaped by the Rising of Orr, leaving question to how many mursaat ruins and ports remained.

Regions
The World of Tyria
Retrieved from "https://wiki.guildwars2.com/index.php?title=Ring_of_Fire&oldid=2504168"
Categories: