This article is about the lore figure. For the statue object, see Jora (statue). 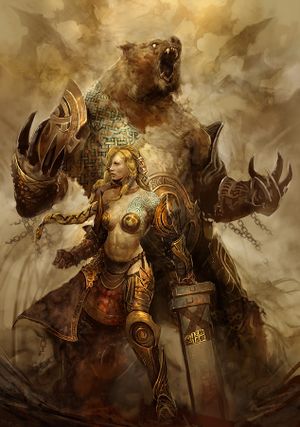 Jora is one of the legendary heroes of the norn. In life, she was a norn warrior that fought against The Great Destroyer, Primordus' champion. She and her brother, Svanir, were touched by Jormag's corruption. Jora resisted the corruption, but lost her ability to Become the Bear, while Svanir embraced it and became the Nornbear, a champion to the Elder Dragon of Ice and Persuasion.

She is honored for fighting and killing her corrupted brother, which helped her regain her honor. Because of her fratricide, the Sons of Svanir, a cult to Jormag, are very misogynistic towards all women.