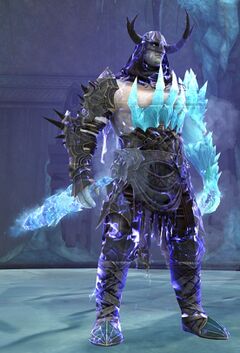 The Fraenir of Jormag is the highest ranking Son of Svanir and chosen by the Elder Dragon Jormag. He is responsible for raising powerful Icebrood Constructs and summoning the far-reaching blizzard in Bjora Marches in preparation for the Icebrood invasion. The fraenir has invaded the Raven Sanctum and stolen Raven's magic within which he corrupts for his master's purposes.

The fraenir was chosen by the Elder Dragon Jormag to promote its cause. As the highest ranking officer in the Sons of Svanir, he possessed great elemental magic with which he could summon devastating blizzards.[1]

By 1332 AE, Jormag ordered the fraenir to invade the Bjora Marches with the Sons of Svanir and the Icebrood. To accomplish his goal, the fraenir assaulted the Raven Sanctum where he imprisoned the shamans of Raven within ice pillars and began stealing their magic in order to corrupt it and use it for the benefit of his campaign. To keep himself safe, the fraenir used corrupted Raven magic to seal the sanctum and thus prevent anyone from accessing it.

By the time General Almorra Soulkeeper arrived at Jora's Keep and began formulating a plan with Warmaster Jhavi Jorasdottir on how to breach the sanctum, the fraenir had already amassed a large army with which he terrorized the marches. He summoned a powerful blizzard and, using corrupted Raven magic, raised icebrood constructs which he sent to assault Jora's Keep, the Vigil's base of operations in the region which was being protected by the magic of Raven's havroun Weibe.[2]

Communing with Jormag, the fraenir eventually sensed how a group consisting of the Pact Commander, Braham Eirsson, Crecia Stoneglow, Jhavi Jorasdottir and Rytlock Brimstone had managed to enter the inner sanctum after they had used the two Raven lenses which had been in Almorra and Jhavi's possession. The elementalist gleefully welcomed the party, focusing on the Commander in particular. He admitted that he and his master had underestimated the Commander's skill of clearing obstacles but that they would not repeat the same mistake again. The fraenir announced that he had been called to something greater and that the era of Dragon was about to begin.

Despite fighting with all his might and leeching power from the Raven shamans, the fraenir was ultimately defeated. Before the party could recover, however, the fraenir's body suddenly stood up, now manipulated by Jormag. Using the elementalist's mouth to speak through, the Elder Dragon explained that it wanted to help the newest Elder Dragon Aurene to bring eternal peace to Tyria and how Aurene and her allies would eventually realize that they needed Jormag's help to face the "terrible things that lurk just beyond the horizon." Having said its piece, the Elder Dragon's presence left the fraenir's body which fell to the ground.

Section-stub. This key section of the article is incomplete. You can help the Guild Wars 2 Wiki by expanding it.
Reason: May still be missing some skills from The Invitation story instance.