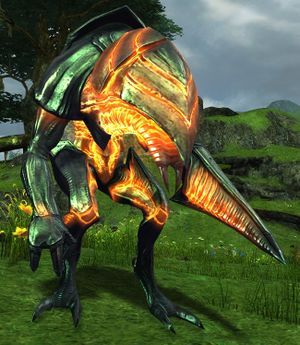 Destroyers care only about killing. They are forged from the molten heart of their master-Primordus, first of the Elder Dragons to rise. The dwarves forestalled his coming, but at a terrible price. They are all but gone now, and Primordus is rising to destroy all races.

The destroyers are the minions of the Elder Dragon Primordus, primarily found in the Depths of Tyria and near volcanic locations. They've spent the last 250 years waging war with the dwarves and any other inhabitant of the Depths. They are capable of appearing anywhere in Tyria due to Primordus' constant underground activities.

In recent history, the destroyers started appearing at some time before 1078 AE, when humans first met the asura and their dwarven allies after investigating a series of earthquakes around the world. Together, the makeshift alliance of races established a base of operations in the Eye of the North and recruited more allies to the cause, including the Ebon Vanguard, a unit of Ascalonian soldiers operating behind charr front lines, and the individualistic race of hunters, the norn. Their efforts were successful, and the leader of the destroyer horde, the Great Destroyer was slain. However, this only set back the threat by few decades, as the Elder Dragon eventually awakened and rallied its minions anew, driving many races such as the asura, skritt and feral murellows to surface.

While other dragon minions are often corrupted versions of living creatures, destroyers are mindless beings created from rock and fire; they appear as mockeries of living creatures, such as trolls or harpies.[2] However, when a living being is encased by rock, its body could turn into lava, creating a corrupted creature.[3] In addition, the Destroyer Queen has created destroyers using egg-like pods, a feat previously thought impossible or at least not widely known.

Destroyers are often capable of dealing heavy damage in melee combat and are also known to make use of fire magic, and are almost always immune to burning. Sufficient application of force is enough to defeat any destroyer, after which it will break into nothing more than a pile of stone and ashes.