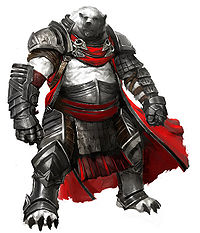 The Claw of Koda is one of the two leaders of a kodan Sanctuary. Those that take on the role of the Claw are chosen for their charisma, strength at arms, and public leadership potential. It is the Claw's responsibility to maintain the order and security of the Sanctuary, with the help of a small group of Guardians. In turn, the Claw leads the hunters and the warriors of the Sanctuary.

The Claw is the only one that is allowed to seek guidance from the Voice of Koda outside of his shaman keepers. This is because there is a connection between the Claw and the Voice, which links both of them to the Sanctuary; because of this, the Claw must interpret and carry out the will of Koda given through the Voice and, in turn, act as the intermediary between the Voice and the kodans. The Claw takes his duties seriously, believing that, if he fails, the result would taint the Voice and the Sanctuary as well; likewise, neither the Claw nor the Voice has the authority to overturn the other's decisions.

The kodan believe that the fates of the Claw and the Voice are linked, both symbolically and mystically, to each other and to the Sanctuary. As such, when one fails in his duties, it taints the other and both must be purified. Likewise, if the Voice were to die or go insane, the Claw would in turn resign from his duties. Because of this link, they are often chosen at the same time whenever possible.

Those who do not understand the kodan culture would often consider the Claw to be the "ruler" of the Sanctuary, as he operates the physical presence of the Sanctuary and is the visible leader.