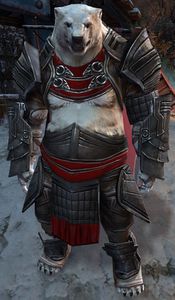 It is customary for a Claw to step down without a Voice. But I fear if I do, my people will succumb. So I linger—a counterweight to keep what little balance remains.

Cloudseeker is the Claw of Koda of Still Waters Speaking, a kodan settlement in Bjora Marches, where he and his fellow kodan struggle against the temptations of the eerie whispers which plague the region.

As the Claw of Koda, Cloudseeker once led the kodan of Still Waters Speaking together with Ushers-in-Spring, his Voice of Koda. Back then, Drakkar Lake was a smooth glass and had a voice of its own, a soft whisper, almost inaudible. But as time passed, and Elder Dragons were felled, the whispers grew stronger. Jormag's champion, Drakkar, had awoken.[1] Ushers-in-Spring, being a Voice of Koda, was no stranger to voices in her head. She listened to the whispers, tried to reason with them, but that was her demise. She turned and became another servant of Jormag. The kodan of Still Waters Speaking had lost their Voice, and thus, their connection to Koda.

It is customary for a Claw to step down without their Voice, but Cloudseeker put his people's wellbeing above tradition. He continued to lead the kodan of Still Waters Speaking, standing strong, lest his people succumb to the Elder Dragon.

The kodan of Still Waters Speaking distanced themselves from other settlements, and became wary of any outsiders. When the charr Crecia Stoneglow and Rytlock Brimstone, following Imperator Bangar Ruinbringer's trail, came across the settlement in 1333 AE, the kodan there imprisoned them until they could verify that the charr pair's voices "were their own", that they had not fallen to the whispers. Shortly afterwards, the norn Braham Eirsson and the Pact Commander, after earning the trust of the kodan by slaying several Sons of Svanir in the area, entered the settlement, had an audience with Cloudseeker, and vouched for the two charr.

Cloudseeker explained to the party that Bangar and his army had been spotted in the region, and feared that his judgment was being clouded by the whispers. The Claw revealed the source of the whispers to be Drakkar. More than a champion, Drakkar is the mouthpiece of the Elder Dragon, amplifying Jormag's whispers. Without it, the Elder Dragon can not whisper beyond its lair. However, defeating Drakkar would not be an easy task, as Cloudseeker illustrated in his bonfire how the Lost Spirits of the Wild—Eagle, Ox, and Wolverine—had been corrupted by Jormag while Drakkar feasted on their infinite magic. If the Commander and allies agreed to aid the kodan of Still Waters Speaking, the kodan would then aid them in defeating Drakkar.

As the Commander made preparations to aid the kodan, Jhavi Jorasdottir appeared in the camp and offered her Vigil forces' aid to help the kodan against hostile forces in the region. While staying at Still Waters Speaking, Jhavi conversed with Cloudseeker and sometimes disagreed with him about the kodan way of doing things. Despite their arguments, both leaders acknowledged that they needed each other's respective strength to face Drakkar and its minions.[2]

After securing the kodan of Still Waters Speaking, Braham claimed the power of the Lost Spirits of the Wild, and Cloudseeker honored his word and offered his aid in the battle to come. He instructed the party to destroy Jormag's profane idols, scattered all throughout the Marches, which Drakkar uses to heal itself from any damage. At the same time, Jhavi led a direct attack on Drakkar, forcing it to retreat away from the lake into a southern cavern surrounded by rocks. With Drakkar weakened and cornered between the rocks, the Commander's party rallied to face the dragon champion while Cloudseeker prayed that Koda, and the Spirits of the Wild, guide them to victory.

Following Drakkar's demise, the kodan began recovering in their settlement. Some kodan voiced their concern about Cloudseeker not stepping down from his role of Claw; believing that traditions should be honored even in difficult times, or else the kodan themselves would be lost from Koda's grace.[2]

As news spread about both Jormag's latest movements and the increasing activity of Primordus's destroyers later in the same year, Cloudseeker traveled to the Eye of the North to exchange ideas with other races' representatives.

While conversing with the Pact Commander, Cloudseeker explained that he and many kodan were willing to join the fight to return the world to balance from the disharmony caused by the Elder Dragons. When the Commander inquired if Cloudseeker, and the rest of the kodan by association, were actually norn wearing bearskin, Cloudseeker calmly countered the claim by questioning whether the Commander was just someone pretending to be the Pact's commander.

The whispers tell me I should not trust you. Which is exactly why I dare to.

Where is everybody? (Before earning progress in the "Shadow in the Ice" Mastery meta-achievement.)

Cloudseeker: My people have grown...distant to one another. Distant to Koda. Unbalanced.
Cloudseeker: Some left seeking food. Some to rebuild our defenses. Few have returned. Go—find them. Guide them back to Koda.

How is the village recovering? (After earning progress in the "Shadow in the Ice" Mastery meta-achievement.)

Cloudseeker: Slowly. You have helped the kodan of Still Waters Speaking, but Jormag seeks to undo your work.
Cloudseeker: As long as Drakkar lives, my people will be tempted by the Elder Dragon and its whispers.

What happened to this village's Voice?

Cloudseeker: Her name was Ushers-in-Spring. She was our connection to Koda, as all Voices are.
Cloudseeker: When Drakkar awoke, and the whispers grew louder, she tried to respond. Tried to reason. She listened. And she was turned.
Cloudseeker: It is customary for a Claw to step down without a Voice. But I fear if I do, my people will succumb.
Cloudseeker: So I linger—a counterweight to keep what little balance remains. I miss her.

What exactly are the whispers?

Cloudseeker: They are the ever-present temptation of Jormag. The Elder Dragon speaks to any who might listen.
Cloudseeker: It is one thing to hear the whispers. It's another to heed them. Remember, Jormag does not take. Jormag turns.
Cloudseeker: Jormag's truth becomes your truth. If you desire power, Jormag will give it to you. And you give yourself to Jormag.

Is Drakkar the source of the whispers?

Cloudseeker: Jormag speaks. But Drakkar is its mouthpiece. The whispers radiate from it, like heat from the sun.
Cloudseeker: Kill Drakkar, and you stop the whispers. It is as simple as that.

When first speaking with him

The world goes cold, yet the battle burns hot. We are prepared to do our part. As you will do yours. Balance.

Show me how I can help. (closes dialog and opens Marshaling the Kodan achievement panel)

Let's talk about your people.

Ask, and I will answer.

All this talk about balance...and now you're joining the fight?

The world is in disharmony. We are helping correct that.

Be honest. Aren't you really just a norn wearing a bearskin?

Aren't you really just someone pretending to be the commander?