Bear (Spirit of the Wild)

This article is about the Spirit of the Wild. For other uses, see Bear (disambiguation).
Spoiler alert: The following text contains spoilers relating to the personal story and The Icebrood Saga. 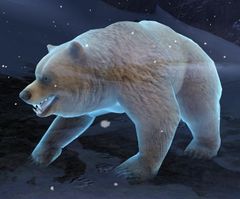 Race
Spirit of the Wild
Location
Means to an End
(The Great Lodge)
Romke's Final Voyage
(Desmina's Hallows, The Shipyard)
One Charr, One Dragon, One Champion
(Hall of Monuments, Frost Citadel)

Battle with the strength of bear.

— Bear Shaman in The Great Hunt

Bear, also known as Spirit of Bear or Bear Spirit, is a Great Spirit of the Wild. She is revered by the norn, who build shrines and lodges to honor her, the most notable being the Bear Lodge. According to her Speaker, Alarrin of the Frost, Bear embodies strength in body and mind, both in the person and in us as a people. Bear also stands for ferocity and confidence, and many norn believe her to be the mightiest of all the Spirits of the Wild.

As the Spirit of ferocity and confidence and the natural embodiment of all bears, Bear is the most revered of all the Spirits of the Wild and is said to be an icon of strength, insight, and wisdom. According to ancient myths, she bestowed the norn with the totem ability to Become the Bear.[1] The norn view Bear as both a Mother who protects her cubs and a Sister who helps people find their inner strength.[2][3] She is said to give norn the power to face all odds,[4] but some norn are aware that she can also strike with surprising speed.[5] Because of the ursine appearance of the kodan, some norn believe that the kodan are blessed by Bear.[6] Some followers of Bear claim that she has appeared in their dreams to give them guidance.[7]

In 1078 AE, the Elder Dragon Jormag began influencing Tyria after millennia of slumber. Through its champion Drakkar, the Ice Dragon whispered promises of power to the norn hunter called Svanir, and turned him into yet another of its champions, the Nornbear. The Elder Dragon also robbed Svanir's sister, Jora, of her ability to Become the Bear when she rejected the call,[8][9] although some believed that the Spirits of the Wild had taken the power instead to punish Jora for doing nothing to stop Svanir initially.[10]

After Jora had slain the Nornbear to end his rampage, she understood that she now had her brother's blood in her hands. She sought guidance from the elder Egil Fireteller who helped her commune with Bear in a ritual. Bear's reply was simple: "Blood washes blood." To redeem her family's name and wash away her sins, Jora needed to retake her family's lands which had fallen to the charr, and accompanied an avatar of Bear from a haunted homestead to a northern shrine which channeled Bear's strength into those it deemed worthy. After succeeding in defeating the charr with the help of her new allies from southern Tyria, Jora regained her ability to Become the Bear with the Spirit's blessing.

Following Jormag's awakening in 1165 AE, the norn tried to defend their lands in the Far Shiverpeaks from its corruption and destruction, but they were no match for the Ice Dragon. Bear was one of the Spirits of the Wild who aided the norn in their exodus to the south.[11] It is said that she was one of the four Spirits—along with Raven, Snow Leopard, and Wolf—who revealed themselves to the norn hero Asgeir Dragonrender over the field of battle after Jormag had devoured Owl and instructed him to lead the surviving norn south to a sanctuary while Ox, Eagle and Wolverine stayed behind to distract and battle the Ice Dragon.[12][13] Asgeir's personal journal, however, included additional information not known by the rest of the norn about the circumstances of him severing Jormag's fang and his reasons for leading the exodus south.

Thanks to her actions during the exodus as well as her earlier revered status among the norn, Bear was seen as one of the four most highly regarded Spirits of the Wild and had the Bear Lodge built in her honor in Hoelbrak. Although the four Spirits had worked together to help the norn survive Jormag's attacks, they—or their followers—were not always on the best of terms. Followers of Wolf scorn Snow Leopard's stealth as "cowardice," and the shamans of Bear are known to mistrust Raven's adherents, calling their deceptions dishonorable and weak.[2] Some norn like to speculate if Bear or Wolf would win in a fight while others deem such questions useless as comparing the two Spirits' respective strengths is like asking what would happen if the sun and the wind fought.[14]

For centuries, the norn hunters of Torstvedt Homestead had focused on acquiring power and made offerings to Bear, seeking to gain her strength while ignoring her guidance. When Jormag's influence began spreading, many hunters saw the Ice Dragon as a direct path to power, so they abandoned Bear and left in waves to join the Sons of Svanir.[15]

In the past, Bear, Raven and Snow Leopard gave their respective blessings to Wolf's map which was in Captain Romke's possession. When the Spirits were invoked, the map could display everything between the traveler's current position and the destination they wanted to reach. However, the boastful norn crew's voyage came to a sudden end due to the Rising of Orr which was caused by the awakening of the Elder Dragon Zhaitan in 1219 AE. The map was lost in the crew's battle against the Risen, and the slain crew members' ghosts were cursed to haunt the shores of Orr until the map was retrieved and the Spirits had forgiven the crew's pride.[16]

In 1325 AE, Bear's havroun Grechen had received a warning from Bear about the Sons of Svanir planning to ambush a caravan. She, Eir Stegalkin and the Slayer of Issormir joined forces and fought off the Sons, and the havroun wondered if Bear had sent the pair to her aid. To pay back her debt, Grechen assisted the pair and Havroun Svena in exploring the Mists and discovered what had happened to Wolf's Apprentice Valda and Havroun Solvi.[17] Later that year, Grechen accompanied the Pact to Orr where she was slain and reanimated as a Risen, forcing the Pact Commander to kill her and leaving Bear without a havroun for a time. During the campaign, the Commander and Trahearne retrieved Romke's lost map from Risen-infested waters and lifted the curse which had affected the crew's ghosts. As the map was brought to the grateful Romke, he was able to invoke the Spirits' magic to help the pair locate the Artesian Waters while avatars of the four Great Spirits watched on in approval.

During the campaign against Jormag's forces in Bjora Marches in 1332 AE, the Vigil made a shocking discovery within the frigid, mountainous confines of Asgeir's Legacy: the personal journal of Asgeir Dragonrender himself. In the journal's pages, Asgeir revealed that he had a private conversation with Jormag after rending the Elder Dragon's fang, and that Jormag had explained how its violent actions had only been a form of self defense. Jormag had come to view Asgeir as a worthy warrior and had realized how much he cared for the norn, so the Ice Dragon let him leave alive with a choice: Asgeir could return with more warriors and watch them all die as the dragon continued defending itself, or he could use the severed fang to convince the norn to move south and live in peace with Jormag promising not to follow them as it had come to view them as a race worthy of being preserved. Realizing that the norn would stand no chance against the Elder Dragon even with the enchantments of the jotun scroll and the blessings of the Spirits of the Wild, Asgeir had lied that the Spirits, not Jormag, had instructed him to lead the norn to a southern sanctuary. Despite believing that the lie had been necessary, Asgeir couldn't help but wonder if he had been tricked by Jormag to give up the fight and if he could have been capable of slaying the Elder Dragon; that uncertainty was a burden he would carry for the rest of his life.

In 1333 AE, Blood Legion imperator Bangar Ruinbringer led his Dominion army to the Drizzlewood Coast where he intended to awaken and subjugate Jormag deep within the hallowed site known as the Sanctum of the Wild. He came to realize that he needed to corrupt his soldiers into the Frost Legion with Jormag's blood in order to hasten the Elder Dragon's awakening. The Blood Imperator set aside his initial aminosity with the Sons of Svanir and allied with the cult who then helped him capture the totems of Bear, Raven, Snow Leopard, and Wolf. Bangar positioned the totems before the slumbering Jormag in a twisted ritual, planning to corrupt the Great Spirits of the Wild and use them as a carrot to control the Ice Dragon by infusing their magic into himself.[18]

The Great Spirits' essence was trapped within the sacred totems so they were unable to call for help at first, remaining silent to any norn trying to invoke them.[19] Once Braham, Crecia, Rytlock and the Commander had successfully used the lesser Spirits' power instead to open the enchanted door to the Sanctum of the Wild, Braham was finally able to hear the Great Spirits calling to him in pain.[20] Upon reaching Bangar deep within the Frost Citadel, they learned his plans to leech the Great Spirits' magic. In the ensuing battle, the party managed to sever Bangar's link to the Spirits although Ryland arrived on the scene soon after to direct the Great Spirits' magic straight to Jormag instead much to Bangar's frustration.

Petitioners who seek Bear's guidance often stop by at the Bear Lodge. While there, they ask for advice from Bear's shamans who help the petitioners realize what they need to do to adapt to the challenges that await them which can range from battles to facing old age. Bear likes offerings that take strength to seize—animal hides from hunts or trophies from other tremendous feats.[21] She blesses those who care for their families, and renews hunters who have shown their strength by surviving in the wilderness.[14]

One of Bear's notable lessons is about the changing of the seasons and how this cycle must be respected and embraced as it relates to all living things in the world. In the spring, the bears awaken, find mates, and form families. In summer, they teach their cubs to survive. In autumn, they hunt, and the forest belongs to them. In winter, the bears belong to the forest. The bear analogy demonstrates that a creature's season changes as it ages, but it remains part of the forest and thus part of the circle of life throug all the changes. For example, an aging hunter suffering from a disabling wound should not try to walk autumn's path in winter and must learn to wear a new mantle as they adapt to their life's changed season.

Petitioners who are too agitated to focus on anything are instructed to take a breath, look deep inside themselves, talk to Bear and listen to her so they can find peace of mind. 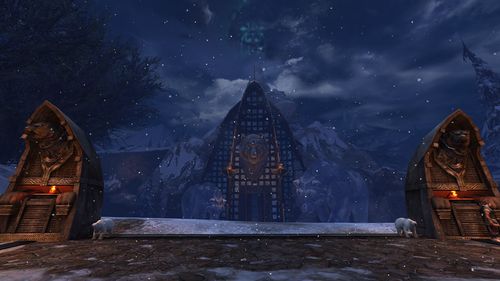