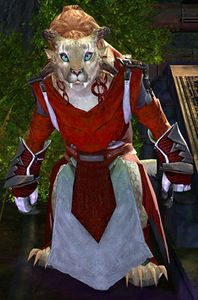 With Bangar's true leadership and vision, the charr have evolved!

Varinia Stormsounder is the Minister of Morale for the Blood Legion. Hers is the voice that can be heard announcing the status of meta events throughout Grothmar Valley. She spends much of her time during the All-Legion Rally micromanaging the Metal Legion concert, from attempting to secure high-profile charr guests such as General Almorra Soulkeeper, to approving which songs the band may sing and even dictating lyrics in order to promote Imperator Bangar Ruinbringer's ideals.

Acting as the Minister of Morale for the Blood Legion, Varinia Stormsounder did her part to promote Imperator Bangar Ruinbringer's ideals with her propaganda messages that could be heard throughout Grothmar Valley during the All-Legion Rally in 1332 AE. She also got involved with the Metal Legion concert, approving which songs the band may sing and even dictating their lyrics in order to promote Bangar's message of charr unity and Blood Legion superiority.[1][2] Even after the concert turned out to be a rousing success, the minister showed her disappointment to the band members by telling them that they could have used Bangar's name a few more times in their songs.

Once Bangar had made his ambitions to usher in a new age of charr supremacy known and formed the Dominion with charr soldiers who agreed with him, Varinia joined her imperator's side. By 1333 AE, the minister had traveled to Drizzlewood Coast where the Dominion faced the United Legions in battle. Varinia used various methods, such as speakers and balloons spreading propaganda leaflets, to spread Bangar's message in order to make an increasing number of soldiers defect to the Dominion's side.

Varinia accompanied Tribune Ryland Steelcatcher and Centurion Cinder Steeltemper to a parley with the United Legions' leadership after the Dominion had taken over most of the territory in Drizzlewood Coast. During the talks, she was quick to correct Ryland by stating that the Dominion forces followed Bangar, not him, while she also told everyone present that Ryland's accomplishments on the battlefield were only a taste of Bangar's reach and how the Blood Imperator would soon claim the Elder Dragon Jormag for the Dominion.

After the parley had ended with neither side reaching common ground, Ryland's group returned north to continue the war effort against the United Legions. At some point, Varinia became corrupted by dragon energy and joined the ranks of the new Frost Legion that consisted of Dominion charr who had turned into icebrood. The transformed minister waited by the bridge at Wolf's Crossing to ambush an enemy party—consisting of Crecia Stoneglow, Rytlock Brimstone, Smodur the Unflinching, and the Pact Commander—that had been trying to apprehend Ryland who had fled after the second attempt at a parley between the two armies had ended disastrously.

Varinia proudly announced her presence to the surprised party and presented the mixed army of corrupted charr and icebrood as the Frost Legion. She also reminded her enemies that she had warned them during the first parley how Ryland's campaign had only been a taste of Bangar's power and how the charr had evolved with the Blood Imperator's leadership and vision. Facing the party in battle alongside other soldiers of the Frost Legion, Varinia fought with all her might but was ultimately felled after a fierce struggle. Despite her death, the rest of the Frost Legion managed to hold the bridge by using artillery strikes to force the Commander's party to retreat.