Owl (Spirit of the Wild)

This article is about the Spirit of the Wild. For her avatar, see Owl Spirit. For other uses, see Owl.
Spoiler alert: The following text contains spoilers relating to The Icebrood Saga.

Owl was a silent and clever predator who put her family's needs and safety above all else. She reminds me that to hunt is not just to kill, but also to provide and protect.

Owl, also known as Owl Spirit, is one of the lesser Spirits of the Wild, and the natural embodiment of all owls,[1] who was lost in battle against the Elder Dragon Jormag while protecting the norn. She is revered by the norn, who have built shrines and lodges to honor her. Owl represents family and hearth, and she is a keen hunter who gives teachings of taking care of one's children. Many of Owl's teachings can be found in Damaged Writings within the Owl Lodge. 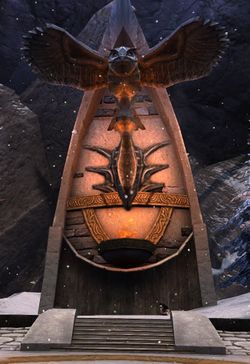 Shrine to Owl in Hoelbrak.

As the natural embodiment of all owls,[1] Owl was revered as one of the Spirits of the Wild among the norn. Although she was a gentle Spirit who embodied home and hearth,[2] she was also a silent and clever predator with ambush-like swiftness and precision.[3] Helping the sick and wounded pleased her.[4] Owl put her family's needs and safety above all else, often teaching others that the purpose of the hunt was not just to kill but also to provide and protect.[5] Tales about Owl depict her offering her wisdom to both norn and her fellow Spirits of the Wild.

Following Jormag's awakening in 1165 AE, the norn tried to defend their lands in the Far Shiverpeaks from the Elder Dragon's corruption and destruction, but they were no match for the Ice Dragon. Owl was one of the Spirits of the Wild alongside Ox, Eagle and Wolverine who stayed behind and fought Jormag to give the norn the time to prepare for their exodus to the south under the guidance of the Great Spirits of Bear, Raven, Snow Leopard and Wolf.[6]

As the battle started, Jormag battered Owl without mercy and wore her down until she was weakened from the brunt of the Ice Dragon's force. Although she was outmatched, Owl chose not to flee because Jormag would have otherwise consumed all the norn below. She raised herself up and flew into Jormag's maw, scratching and clawing to keep the Elder Dragon focused only on her. According to the tales of skaalds, Jormag destroyed Owl's spirit totally, and it was said that there came a cry that carried not through the air, but through the heart of every norn, after which the norn knew that Owl was lost to them.[7][8] All owls became weaker and more confused after their Spirit's sacrifice.[1]

Although the last havroun of Owl confirmed the Spirit's apparent death,[9] Owl shamans and other norn still revered Owl with great sorrow while some shamans seemed to believe they might be able to revive her. Owl had a shrine dedicated to her at Lost Spirits' Hallow in Hoelbrak, as well as the now-wrecked Owl Lodge in Snowden Drifts which was attended to by what seemed to be an avatar of Owl. Anyone who interacted with Owl's shrine in Hoelbrak experienced an assault on the senses with a flurry of feathers, a scream into the maw of oblivion, and a creeping coldness; however, one sensation that towered over them all was hope.

Section-stub. This key section of the article is incomplete. You can help the Guild Wars 2 Wiki by expanding it.
Reason: Missing some Jormag Rising info

In 1333 AE, Braham Eirsson traveled to the Drizzlewood Coast and located the Sanctum of the Wild, a sacred site where the Spirits of the Wild had first revealed themselves to the norn. He attempted to access the sanctum to provide the United Legions a way to breach into the Frost Citadel and stop the rogue Imperator Bangar Ruinbringer from awakening the injured Jormag. However, Braham was met with silence when he tried to invoke the four Great Spirits to channel their magic to open the rune-enchanted stone door, so he resolved to call out to the lesser Spirits to combine their power for the needed ritual instead. Even though Owl was believed to have perished long ago, Braham suspected that some of her spiritual magic still lingered in her totem that he could use to contribute to the ritual along with the other Spirits.[10][11]

After the Pact Commander had delivered the missing totems of Ox, Eagle, and Wolverine to complete the circle of Spirits at the door, Braham began the ritual and invoked the lesser Spirits who gave him clues in which order to activate the magic within each totem. Upon solving the puzzle, Braham, the Commander, Crecia Stoneglow and Rytlock Brimstone witnessed the Lost Spirits' totems light up one after the other with the magic drawn from both the Lost Spirits and other lesser Spirits.

However, when Owl's totem lit up with her full power rather than just a remnant of it, Braham realized the horrific truth: Owl had not perished in battle after all but had been corrupted by Jormag in the past alongside the three other Lost Spirits. To prevent herself from being used by the Ice Dragon, she had cut herself off from the Mists and the norn, thus explaining why her havroun had not been able to sense her anymore and had assumed her to have perished. Owl had then fled to the Sanctum of the Wild and had effectively gone into hiding for centuries.

Because Braham had reawakened Owl via the ritual, the corrupted magic within her would finally be accessible to Jormag. The party theorized that the Elder Dragon might have enough power to awaken with Owl's magic thanks to the ritual. Although the party was able to free the four Great Spirits from totems deep within the Frost Citadel whose magic Bangar and Ryland Steelcatcher were siphoning, they were too late to stop the charr from awakening the rejuvenated Jormag who entered the Mists soon after.

Following the harrowing encounter with Jormag, the Commander traveled to the Eye of the North and met with Owl Shaman Garon whom Braham had summoned there to seek the shaman's guidance regarding Owl's reawakening. Garon's faith had diminished upon learning about Owl's corruption, and he worried if all Spirits of the Wild were destined to fall to Jormag. Thanks to receiving inspirational words of encouragement from the Commander, however, the shaman decided to go on a pilgrimage to rekindle his and other norn's faith in Owl.

With the Commander's help, Garon visited several sites sacred to Owl and helped out the Spirit's faithful with both inspiring words and deeds. The pilgrimage made the shaman recognize similarities between Owl's and the Commander's resolve. Once Garon had gone through a ritual of subjecting himself to Owl's pain at the Sanctum of the Wild, he found his faith renewed and believed that he had gained enough insight to guide Braham on his quest. 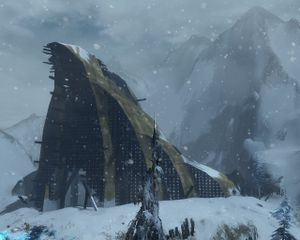 Lore discrepancy:
According to Owl Shaman Ulgadis, the battle against Jormag would have been fought above the Owl Lodge in Snowden Drifts, but Skaald Stjarna seems to contradict her tale and suggest the actual site of the battle was farther north.