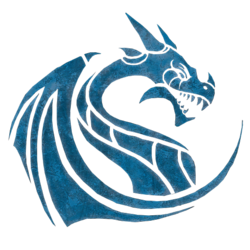 This all-male cult of norn have rejected their race's reverence for the Spirits of the Wild. Instead, they're obsessed with emulating what they see as the greatest predator in Tyria: the Elder Dragon Jormag, who drove the norn from the northern Shiverpeaks over a century ago.

The Sons of Svanir, also known more simply as the Svanir, are a cult of male norn who have turned to seek the power of the Elder Dragon Jormag, whom they call Dragon, believing the Elder Ice Dragon to be the ultimate Spirit of the Wild and so in turn worship primarily the Ice Dragon, believing other Spirits of the Wild, especially those considered of lesser amounts of importance within the norn pantheon, to be weak.

According to the individualistic norn culture, the Sons of Svanir as a group are not evil, nor are they viewed as such. Though many of them commit evil acts such as murder and stealing as well as corrupting nature by other norn, individual members of the cult are allowed to co-exist within norn society in Hoelbrak so long as they do not prove themselves as a threat.[1] Unlike most norn, the Sons of Svanir do not remain independent for their strength, but rather barter for it.

Unlike the Spirits of the Wild, the Sons of Svanir have no true havroun for Jormag. The "shamans" of Dragon only preach corruption and feed lies.[1] The cult views Jormag as encompassing all the dragons in the world and being a fierce force of destruction like a forest fire and a tornado.[4][5]

The Sons view many norn men—as well as men and women of other races—too weak in mind, heart and body to be worthy to join Jormag's cause.[6] Norn women are not allowed to join the cult because of Jora's "crimes" against Dragon and Svanir.[7] The cultists do not view their actions as evil; to them, there only exist predators and prey in nature, and they have taken the role of predators who promote strength and will over weakness and numbers.[8][9] They revere raw power and the cycle of growth and destruction in the world.[5]

The cult began with Svanir in 1078 AE, a norn hunter who led a hunting party with his sister, Jora, over Drakkar Lake when he heard Jormag's voice via the dragon champion Drakkar which was resting under the ice.[10] The voice promised power and prey, and Svanir began to communicate with it. Eventually he became corrupted into insanity, becoming the champion of Jormag known as the Nornbear—a half-norn half-bear creature covered in ice. The voice attempted to reach out to Jora too, but she rejected its temptations and was stripped of her ability to Become the Bear as a result.[11][12] The Nornbear was eventually slain by Jora who would regain her honor and transformation ability by honoring the Great Spirit of Bear with her deeds.

Over the next 150 years after Svanir's death, Jormag seduced and corrupted more norn with the same promises. These norn sought the power of the voice and believed that they were drawing upon it, but in truth it was the other way around—Jormag gained power from the norn it corrupted and hastened its awakening.[13] Since Jormag's awakening in 1165 AE, it attracted more norn to it and transformed them all into icebrood over time. For centuries, the norn hunters of Torstvedt Homestead had focused on acquiring power and made offerings to Bear, seeking to gain her strength while ignoring her guidance. When Jormag's influence began spreading, many hunters saw the Ice Dragon as a direct path to power, so they abandoned Bear and left in waves to join the Sons of Svanir.[14]

Section-stub. This key section of the article is incomplete. You can help the Guild Wars 2 Wiki by expanding it.
Reason: Expand with lore from personal story.

Section-stub. This key section of the article is incomplete. You can help the Guild Wars 2 Wiki by expanding it.
Reason: Expand with lore from Season 2.

Section-stub. This key section of the article is incomplete. You can help the Guild Wars 2 Wiki by expanding it.
Reason: Expand with lore from Season 3.

During the Dragon Bash held in Hoelbrak in celebration of the Elder Dragon Kralkatorrik's death in 1332 AE, several Sons of Svanir were seen observing the festivities from the sidelines while an Icebrood Claymore appeared in the Sons' local base in Dragon Hallow to preach about Jormag's virtues. Some Sons argued with female norn who claimed that they, too, had heard Jormag's call and were just as worthy to join the Ice Dragon's ranks as men were.[7]

Sometime after Dragon Bash, the Fraenir of Jormag sent a message to a group of invading charr led by rogue imperator Bangar Ruinbringer of the Blood Legion consisting of charr of all legions, telling them that he had been upset by the invading charr encroaching on the Svanir's domain.[15]

The Svanir, soon after, were imbued the Spirit of the Wild Eagle's Essence of Vigilance, empowering them. They soon attacked Jora's Keep, tricking the male norn into opening the gates and killing everybody inside, alongside taking in Olar and Torrin, two of Braham Eirsson's guildmates. The Svanir captured General Almorra Soulkeeper and Warmaster Jhavi Jorasdottir and took Almorra to Darkrime Delves where she escaped and was killed by Imperator Bangar while Jhavi was taken to the Boneskinner Den where Jormag could speak to her. 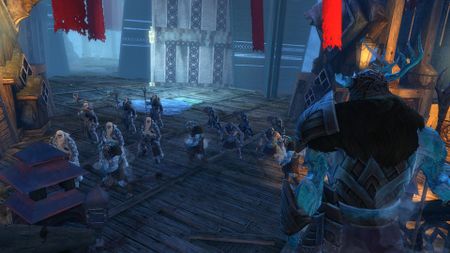 A gathering of Sons of Svanir before an Icebrood Shaman.

Sons of Svanir encountered in the Icebrood Saga maps (such as Bjora Marches) have a blue hue, and defeating them drops blue essence orbs of Vigilance. The orbs bear the likeness of Eagle, one of the lost Spirits of the Wild. Acquiring 30 stacks of the essence provides a powerful special action key skill.