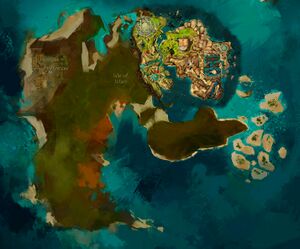 Map of the Isle of Istan.

The Isle of Istan lies in the southwestern portion of Elona and was among the first places humans colonized. The first human rulers, the Primeval Kings, once inhabited a city there called Fahranur until the Dynasty came to an end with the outbreak of the Scarab Plague. The western half of Istan grows lush jungles and wetlands, while white sand beaches and plains comprise the eastern half.

Istan is now a vassal to Palawa Joko's Awakened kingdom.

The World of Tyria
Retrieved from "https://wiki.guildwars2.com/index.php?title=Isle_of_Istan&oldid=2186991"
Category: