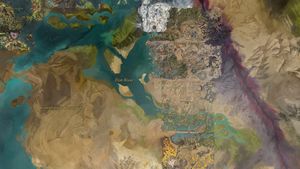 Map of the Elon River.

The Elon River is a major river in Elona. It once flowed south from Vabbi through Kourna and acted as the main source of water for agriculture in those regions. However, in 1135 AE, Palawa Joko dammed the headwaters of the river, diverting the water into the Crystal Desert. While the Desert was transformed into a lush grassland, Vabbi and Kourna were plunged into famine and soon fell to the undead warlord.

The river now reaches towards the Sea of Sorrows in Tyria along the southern edge of the Steamspur Mountains, flooding old settlements in the Crystal Desert such as the Old Amnoon.

After Kralkatorrik's flight over Vabbi, the damming of the river might have been destroyed, since the world map appears to show that the river has returned to its original flow. Although the flooded regions of the Desert remain that way, following the river's flow upstream from the southern Elon Riverlands seems to indicate that the Brand interrupts the northward flow intended and achieved by Joko. Additionally, the river can now be seen flowing southward from the northeastern Domain of Vabbi, through Jahai Bluffs and then on to southern Domain of Kourna where it once more flows out to open waters at Gandara.

The World of Tyria
Retrieved from "https://wiki.guildwars2.com/index.php?title=Elon_River&oldid=2369113"
Categories: