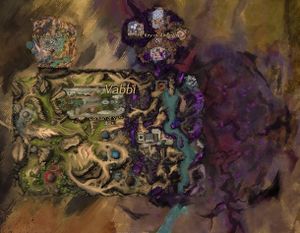 Vabbi encompasses a large portion of northeastern Elona, being comprised of deserts and savannahs with scattered cities and palaces. It was originally colonized by humanity in 42 AE under the leadership of the Primeval Kings, and became an independent province alongside Kourna and Istan after the Shattered Dynasty Era. While independent, it was ruled by Clansmarshals that were determined by their wealth, the wealthiest gaining the nickname Princes of Vabbi.

All of this area is now part of Palawa Joko's empire, having been the first of Elona's three provinces to be conquered by the lich in 1135 AE. Under Palawa Joko's rule, the province's people have slowly become indoctrinated by Palawa Joko's teachings, and unerringly view him as a god-king. Because of this, the Awakened and undeath ingrained deeply into Vabbian culture. The province retains the concept of princes ruling the nobility, though these princes and clansmarshals have become much more distanced from its people compared to before Joko's reign.

In 1330 AE, the Elder Dragon Kralkatorrik stopped here briefly before flying south into western Kourna, branding half of the Vabbian territory, most notably in the area now known as the Domain of Vabbi.

The World of Tyria
Retrieved from "https://wiki.guildwars2.com/index.php?title=Vabbi_(region)&oldid=2591071"
Category: