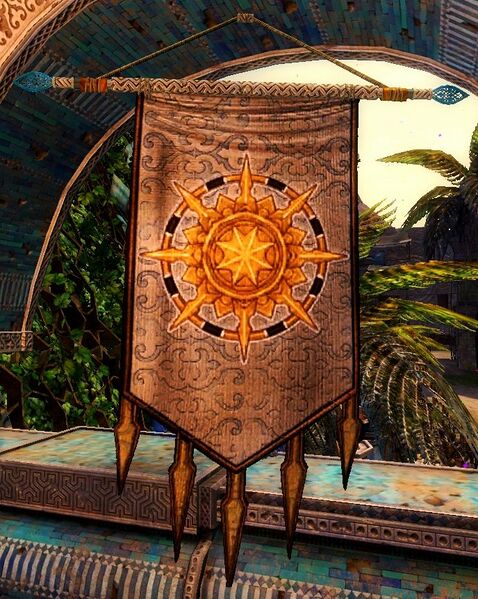 The Sunspears were born of a need to protect a nation. By joining this order, we declare our dedication to the people of Elona.

We will defend Elona from every threat, whether large or small, martial, mystical, or supernatural. We will strike down foes and lift up allies. A Sunspear never fights alone.

We will live in accordance with the eight virtues: valor, humility, honor, honesty, justice, compassion, sacrifice, and loyalty.

We respect all but answer only to our own. We are the unbreakable wall to shelter the innocent, the unstoppable arrow to pierce the enemy, the unsuppressed voice of support and resistance.

The Order of the Sunspears is an elite militant organization that has defended Elona since its formation during the Primeval Dynasty by Queen Nadijeh. In modern days it has become a shadow of its former self, and the few remaining members are being hunted down by Palawa Joko's forces.

When Queen Nadijeh ruled, the nation of Elona was considered lawless and wild, full of warring tribes with no one to protect the innocents stuck in the middle of never-ending wars. Nadijeh rallied powerful warriors under her banner, among them famed heroes like Sogolon the Protector, and established the Sunspear Guard. Under her reign, the warring tribes were conquered and peace came to the land. Since then, the Sunspear Guard had protected the nation of Elona.

As the centuries went by, the Sunspear Guard grew from few to many, and the group renamed themselves the Order of the Sunspears. They survived the fall of the Primeval Kings, and through the bloodiest wars of the Shattered Dynasty. When the Scarab Plague struck the Isle of Istan, the Sunspears were the ones who evacuated the populace and quarantined the island to prevent the plague from spreading, and later helped to restore civilization to the island. As the united governance of Elona fell and formed into three provincial governments, the Sunspears remained independent from these governments, but protected the lands equally from all threats.

When Palawa Joko first rose to conquer Vabbi in 860 AE, the Order of the Sunspears stood against the Awakened army. Though they were devastated from the battles in Vabbi, they remained vigilant and aided Turai Ossa when he struck down the undead lich two years later in the Battle of Jahai. The Order of Whispers, formed around that time, helped seal the undying lich lord into a prison he would not escape from.

In 1075 AE, the Sunspears rallied against Warmarshal Varesh Ossa as she attempted to bring about Nightfall. The Sunspears first learned about Varesh's dark intentions through Tahlkora, a young runaway who had overheard Varesh and General Kahyet praising Abaddon and speaking of Nightfall. Upon confirming Tahlkora's accusations and killing Kahyet, the Sunspears prepared to launch an invasion against Gandara, the Moon Fortress. Though the siege had begun well, the Sunspears were overpowered and forced to flee in disarray once Varesh had summoned an army of demons to assist her. Spearmarshal Kormir, who led the assault, was blinded and captured.

The Sunspears recovered slowly, finding sanctuary in a deep cave system that had access to various points in Kourna, and garnered new allies in the form of the Veldrunner centaurs and the Order of Whispers. Acknowledging that they could not win the war alone, they rallied north to Vabbi, though they were followed closely by Varesh's army. Unable to stop the Warmarshal of Kourna from performing a new ritual that furthered Nightfall, the Sunspears chased Varesh towards the Desolation. They could not cross the sands, however, so they were forced to form an alliance with Palawa Joko who had recently been freed by upheavals caused by Nightfall.

In desperation, the Sunspears struck a deal with the undead lich: in return for the knowledge of how to cross the sulfuric wastelands, the Sunspears retook Joko's Bone Palace from Margonite control and helped restore enough order in his army so that he could use his forces to combat Abaddon's minions. The Sunspears tracked Varesh down to the Ruins of Morah, but were unable to kill her before she performed her third and final ritual, one that breached the barrier between Tyria and the Realm of Torment.

Forced into Abaddon's prison, the Sunspears and their allies sought to kill the God of Secrets himself. Given blessings by the Five Gods, and led by a blinded Kormir, the heroes traveled to Abaddon's Gate and slew the fallen god. Spearmarshal Kormir leaped into the magic unleashed by the dying god and ascended into godhood herself as the new Goddess of Truth, Order, and Spirit.

The peace brought about by this victory did not last. Letting Palawa Joko remain free had ultimately proven the Sunspears' own undoing. In 1175 AE, after a hundred years since his release, the undead lord finished gathering his strength.[1] Unable to control his ego, Joko grew to hate the Sunspears' rise in popularity for their deeds in confronting Abaddon and for the prestige of Kormir's rise to godhood. As revenge for this "slight", Joko sowed seeds of deception among their ranks.[2] Promising power, wealth, prestige, and longevity, the lich fractured the Sunspears, gaining the allegiance of many in the Order. These traitors became the first of the Mordant Crescent, and hunted down their former brothers-in-arms.[3][4]

Tahlkora, the last Spearmarshal of the Sunspears, rallied against Joko's new invasion of Vabbi, but there were too few Sunspears by then. Joko captured Tahlkora and, knowing he couldn't kill her without her becoming a martyr, instead cut out her tongue to silence her. But even without speech, she still worked against the undead lich with her writings, so Joko had his forces capture her once more, and took her eyes. Still, without speech or writing, Tahlkora was a symbol for rebellion against King Joko. The lich turned her into an Awakened, but found that he could not control her. In his last attempt to break her, Joko took back enough of what makes an Awakened so that Tahlkora could not move, but left her soul within her corpse. Then he tossed her immobile Awakened body on the Yahnur Plateau to rot.

On the other side of the Crystal Desert, Zehlon Ossa, the last of Turai Ossa's lineage, rallied Sunspears and defectors alike, aiding those who sought to flee Joko's domain. Joko's forces managed to capture and turn Zehlon and his allies into Awakened to serve his own forces. With this, the Sunspears no longer had a symbol to rally behind, and became more fractured.

When the Sunspear Order was effectively defeated, Palawa Joko had outlawed the use of spears to further crush and outcast any survivors by destroying their symbol. As such, some had turned to the use of daggers instead, becoming specialized as spellbreakers to fight Awakened magics and detect their spies. Daggers were chosen due to their precision, and the sentimental value from when broken off spearheads would be reforged as dagger.[5]

Although a few Sunspears still remained after the fall of their order, the Mordant Crescent continued to hunt them down in the following years, occasionally converting and absorbing new traitorous Sunspears into their ranks.