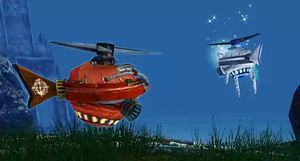 A Function Gyro and a Medic Gyro.

Gyros are small constructs exclusive to the Scrapper elite specialization. When created, they hover around the Scrapper to produce mobile wells, combo fields, and a variety of effects such as healing, damage, or stealth. Most gyros are untargettable and invulnerable. They are not a skill type, but they help the Scrapper create their wells, and the Tool belt gyro, Function Gyro, constitutes the Scrapper's profession mechanic.

Gyros received a significant rework with the March 5, 2019 game update. Originally, gyros were mobile summons that would move by hovering and try to follow the engineer around casting their skill, or walk up to their target and explode. They had a limited life span represented by the Fuel Remaining effect, could be destroyed by damage, were susceptible to crowd control, and the Scrapper could command them to self destruct to end their effects earlier, do damage, and an explosion. However, like all other summons, gyros were limited by pathing, they could only reach their target if there were no elevations that would require jumping or falling in their path. This, coupled with their limited life span, vulnerability to crowd control, and relatively low movement speed, meant gyros could sometimes have a hard time reaching their target.

With the rework, gyros were turned into mobile wells that surround the Scrapper. No longer limited by movement, the new well gyros can follow the Scrapper wherever they go, while also creating a combo field around them. For flavor, the Scrapper has a purely cosmetic gyro hovering over their heads whenever they cast any of their wells, with one gyro for each well.

The profession mechanic, Function Gyro, was left a gyro, vulnerable to crowd control and damage to allow for counterplay, but is now cast as a ground targeted skill, eliminating targeting issues since the original Function Gyro was bound to the interact keybind. While this skill is available, a cosmetic small scale Function Gyro hovers over the Scrapper.