This article is about the April joke. For the commandos in Jahai Bluffs, see Unknown (NPC). 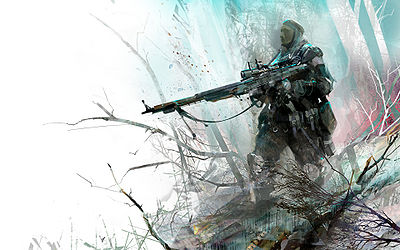 If it bleeds, I can kill it.

The commando is a military-trained soldier profession, who wields various military weapons. A master of the battlefield, this elite soldier is equally at home on the mean streets of Lion's Arch, in the steamy Maguuma Jungle, or on the Orrian front. The multi-role commando is a combat medic, an infiltrator, and a tank. By land, sea, or air, the commando is a technological force to be reckoned with.

The commando has a long reach. Commando weapons don't have set ranges, they just use line of sight. While other professions need to run to different locations on the map, the commando can set up a bunker to snipe at ettins, drakes, and other unsuspecting tangos at map-wide range.

Because of their military training, when they have a knife equipped, commandos gain an automatic bonus to movement speed. They also have the downed state ability to crawl closer to allies who can revive them.

The commando is a soldier profession and thus wears heavy armor.

A commando can easily switch between his two active weapon sets as needed, but swapping ranged weapons triggers a brief cooldown during which the commando shouts, "I'M OUT!" or "RELOADING!".