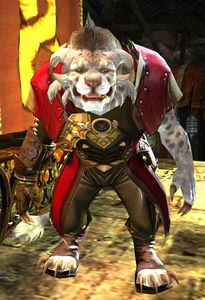 When you stand with the Order of Whispers, you never stand alone.

— Tybalt, in An Apple a Day

Lightbringer Tybalt Leftpaw is a former soldier of the Iron Legion. He left the legions in disgrace after an explosion wiped out his warband and mangled his right hand, giving him his nickname. Tybalt hints that at least some of his warband survived the explosion and forced him out. After leaving the Iron Legion, he joined the Order of Whispers in 1319 AE, performing clerical work for six years and designing the security system for the Chantry of Secrets before being allowed to serve as a field agent. He was paired with a new initiate and assigned the mission of finding, protecting, and escorting Demmi Beetlestone to the Chantry of Secrets; during this mission, he acted as a senior field agent, and despite this he and the initiate continued to work together in recruiting one of the lesser races of Tyria in the battle against the Elder Dragons.

After discovering a Risen Creature in Lion's Arch, Tybalt and his partner traveled to Claw Island to warn Watch Commander Talon of the impending attack. Unfortunately they are too late, and Tybalt sacrifices himself so that his partner, Trahearne, and the injured Lionguard can make it to safety. Zhaitan and Mordremoth (and their minions) both taunt Tybalt's former partner about his death.

Greets
What's up?
Talk to me.
Make it quick.
I'm glad you're here.
Report.

Downing foe and disengaging
Another time, then.
It never ends.