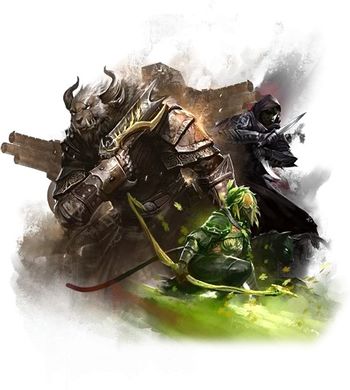 This article is about the profession category. For other uses, see Adventurer (disambiguation).

Adventurer is a category for the three medium armor professions. They specialize in use of precise weapons such as bows and firearms, and in most cases would belong to traditional midline roles in combat. Lore-wise they possess arts developed over centuries since the original Guild Wars, and are perhaps the most "modern" category of professions, capable of using firearms as weapons. They also have ties to practices outside of warfare, namely technology and espionage.

The adventurer professions use medium armor which provides adequate protection, and their ability to survive under damage is more dependent on avoiding incoming attacks rather than enduring them. Players can use runes to upgrade armor, and medium armor is crafted by leatherworkers. Adventurers can use a variety of weapons, but none are able to use maces, scepters, foci or tridents.