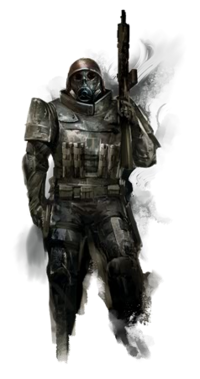 For April Fools' Day 2011 several fools were prepared by ArenaNet and the communities.

In the middle of the day, ArenaNet started with their reveal of the Commando, a military-trained soldier profession. The reveal included the typical profession description complete with in-game videos of certain skills.

Along with the reveal of the Guild Wars 2 profession, they announced that players of the original Guild Wars could try out the commando on the same day. A subsequent update really added a new NPC and a helicopter to Embark Beach which offered a new quest in which player would travel back in time as a commando. The quest was available over the whole weekend.

Along with the in-game changes of the original Guild Wars, ArenaNet also released a game update log, as every year, which included several humorous changes.

The Guild Wars 2 Wiki was the first to start a fool. At 0:00 UTC articles about the Shadowmancer, the "exclusively revealed 7th profession", went live and it was announced via Twitter. Over the day the article received over 30,000 views, and the link distributed via Twitter was clicked 750 times. Several communities, for example Guild Wars 2 Guru, supported the distribution and made the Shadowmancer fool a huge success.

The wiki also prepared a script that displayed every single word in New Krytan.

Shortly after the Shadowmancer was revealed, the German community Wartower revealed their profession: the Alchemist. Part of the reveal was a faked website showing the reveal on the official website, along with the typical description and skill videos. The latter however showed a YouTube video of "Pink Fluffy Unicorns Dancing on Rainbows". The Alchemist was a reference to the community member Phoenix Tears.