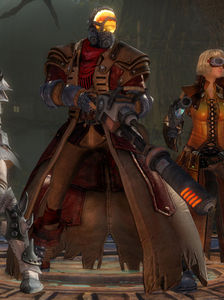 Karde is one of Sabetha's lackeys in Spirit Vale. During the confrontation with Sabetha, he is summoned to fight alongside her. Karde will only appear in the encounter when Sabetha reaches 25% health and has retreated to her bomb pile.