This article is about the lore figure. For the revenant legend, see Legendary Dwarf Stance.

Never before and never again will there be such a ruler as King Jalis Ironhammer. Steadfast and mighty, he inspired love from the dwarves and loved them in return.

— King of the Dwarves by Ogden Stonehealer

Jalis Ironhammer was the last king of the Deldrimor dwarves. With the aid of human heroes, he led the Deldrimor in the war against the Elder Dragon Primordus's destroyers and invoked the Rite of the Great Dwarf to give the dwarves bodies of living stone with which to fight the destroyers. 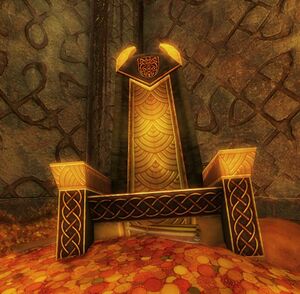 King Jalis's throne amidst the riches of the Hammer's Hoard.

Jalis Ironhammer was born in Grooble's Gulch, to the north of modern-day Snowden Drifts, in either 944 or 945 AE.[1][2] The large number of found Jalis Family Rings suggests that he had many family members. The brother of Brechnar Ironhammer and cousin of Dagnar Stonepate, Jalis was crowned king of the Deldrimor dwarves and was widely regarded as being a good and kind leader. While Jalis was still young and spry, his village was threatened by the frost giant Gorgash. He managed to defeat Gorgash with his trusty hammer and made a pipe out of the giant's bones.[3]

As the King of Deldrimor, Jalis did not involve the dwarves in the Guild Wars but attempted to be friendly with other races such as humans. Although the Deldrimor had had peaceful trade relations with humans for centuries, a rift began forming between various dwarves about how to treat the other races. These ideological differences eventually led Jalis's cousin Dagnar Stonepate to found the xenophobic Stone Summit faction whose goal was to overthrow King Ironhammer and enslave the other races of Tyria in order to usher in an age of dwarven superiority. To realize their vision, the Stone Summit engaged in a brutal civil war with the more peaceful Deldrimor dwarves. At some point during the civil war, Jalis held out in a cave system in Snowden Drifts for two months while the Stone Summit attempted to lay siege to the fort. The cave would come to be known as King Jalis's Refuge in modern times.[4]

Following the Searing of Ascalon during the human-charr conflict in 1072 AE, several Ascalonian refugees led by Prince Rurik attempted to reach a sanctuary in Kryta through the Shiverpeaks in order to flee the invading charr forces. They were forced to fight against the Stone Summit who had been preying on the travelers after blocking the path to Borlis Pass. In order to secure a safe passage for his people, Rurik led negotiations with King Jalis, invoking the ancient alliance between humans and dwarves, and discovered that the Stone Summit were besieging the Deldrimor village of Krok's Hollow. The Ascalonians helped the Deldrimor drive back the besiegers, which earned them the goodwill of Jalis who in turn offered them shelter and valuable intel during their long trek through the mountains.[5][6]

The Ascalonians learned that the Stone Summit were intending to build a new kind of siege weapon which would devastate Deldrimor defenses in a decisive strike. They aided the Deldrimor by stealing the blueprints but found an obstacle at the Frost Gate which they needed to open in order to leave the mountains behind. While the Deldrimor and humans worked on the gate mechanisms, Dagnar and his Stone Summit forces ambushed them, seeking revenge for earlier defeats. Prince Rurik perished in a last stand to buy time for the rest of the weary refugees, including several heroes, to flee to safety.

The Stone Summit eventually succeeded in taking over Thunderhead Keep, forcing King Jalis and his brother Brechnar Ironhammer to sound the retreat for the Deldrimor.[7] Before the dwarven loyalists could be fully beaten, however, they witnessed a welcome sight. The Ascalonian heroes, now accompanied by the Shining Blade and Vizier Khilbron, came to the assistance of the Deldrimor and helped retake the keep after a fierce battle while fulfilling parts of the dragon Glint's Flameseeker Prophecies. Several Stone Summit champions fell during the battle, including Dagnar Stonepate himself.

Shortly after, however, the mursaat and their White Mantle followers tracked down the heroes to the keep and attempted to kill them for having meddled in the White Mantle affairs. With the help of the Deldrimor, however, the humans managed to defeat the invaders. When Jalis proceeded to kill the White Mantle Confessor Dorian as revenge for daring to assault the dwarves, Vizier Khilbron managed to convince the king to stay his hand so the confessor could be interrogated for intel.

Upon learning that the humans would be headed for the Ring of Fire next to take the fight to the mursaat's stronghold, Jalis commented that the heroes were brave to enter such a treacherous and dangerous land. However, when the king pointed out that the mursaat defenses would be too strong and that the party would never get past the beachhead, Brechnar volunteered to lead a dwarven strike force and pay the humans back for helping to scatter the Stone Summit. Realizing that his brother was serious even though the mission could end badly, Jalis ultimately relented and bid farewell to Brechnar, urging him to fight bravely in the name of Deldrimor.[8]

After the heroes' return, Jalis learned that Brechnar had died helping them to finish their mission. He also learned that their ally Khilbron had actually been a lich who had tried to use the heroes against the mursaat to unleash titans on Tyria and how the heroes had defeated the treacherous vizier after the mursaat's fall. The king swore that the Deldrimor and humans would forever be allies after the heroes had helped him secure his throne at Thunderhead Keep. As thanks, Jalis offered the heroes a talisman with which they could claim any Deldrimor weapon of their choice from dwarven weaponsmiths.

Guild Wars: Eye of the North[edit] 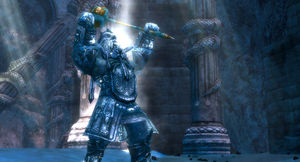 Jalis wields the Hammer of the Great Dwarf during the Transformation of the Dwarves.
Section-stub. This key section of the article is incomplete. You can help the Guild Wars 2 Wiki by expanding it.
Reason: Missing lore

In 1333 AE, the Pact Commander encountered a champion of Primordus bearing the name Destroyer of the Ironhammer Line, and Braham Eirsson encountered another champion named Destroyer of the Last King. However, there is no confirmed relation between these destroyers and the last king of the dwarves and whether they succeeded in their mission or not.