This article is about the activity. For the achievement category, see Sanctum Sprint (achievements). 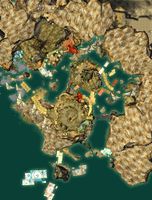 Sanctum Sprint is an activity located in Labyrinthine Cliffs. The race features the use of the aspect skills and power-ups to disable enemies and protect yourself as you fight to make your way to the top of the mountain.

Small blue crystals refill 10% of the player's endurance, allowing them to use Light Dash more often. Orange crystal grant 3 seconds of swiftness and vigor. The aspect crystals provide one charge of the augmented aspect skill, which means doubling the height of Leap and the range for Light Dash and Lightning Pull. Using the augmented variants of skills does not affect the cooldown of the standard skill nor does the augmented Light Dash consume endurance.

The reward is obtainable from a Magnificent Chest at the finish line. You may only claim the reward if you have passed through every checkpoint and have not been sent in by the game to play a practice round. The chest contains:

Rewards during Festival of the Four Winds

During Festival of the Four Winds 2014

Bugs:
Anomaly:
Unlike how other activities provide rewards in Splendid Chests or Chests, Sanctum Sprint provides rewards directly, which can lead to filling up an inventory with extended play.