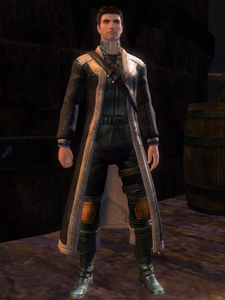 Dougal Keane is a famous human adventurer. He is best known for his journey to the ruins of Ascalon City where he recovered the Claw of the Khan-Ur, allowing open peace talks regarding the human-charr conflict to take place. Upon his return, he wrote a landmark historical treatise on the fall of Ascalon and the Foefire entitled Ghosts of Ascalon.

Dougal was born at around the time of the sylvari's first appearance in the world, in Divinity's Reach. As a child, he emigrated to Ebonhawke and later served in the Ebon Vanguard, where he met Vala and later married her. He deserted in 1319 AE with his unit, comprised of Dak, Jervis, Marga, and Vala. Left behind was Riona, who was forced to take the blame for their actions. The group traveled to Ascalon City to raid the Royal Treasury, but were not prepared for the ferocity of the ghosts there and all but Dougal were quickly killed, including his wife.

Dougal did not return to Ebonhawke, and went on to have many adventures as far afield as the Bloodtide Coast and Caledon Forest. His name came up in an incident involving the Temple of the Ages, and he briefly worked for the Durmand Priory before parting after a disagreement about their book-lending policy (specifically, whether or not they had one).

In 1324 AE, Dougal was hired by an asura named Clagg to help his krewe in disarming traps and recovering the Golem's Eye from the crypts below Divinity's Reach. Shortly after he and his group resurfaced and were arrested by the Seraph, he was released by Riona, now a Crusader of the Vigil, on General Almorra Soulkeeper and Queen Jennah's orders. He was recruited by the Vigil to aid in recovering the Claw of the Khan-Ur from Ascalon City with Crusader Riona and Ember Doomforge, and was later joined by Killeen, Gullik Oddsson, and Kranxx.

Following the events of Living World Season 2 and as of Heart of Thorns, Dougal Keane is now the head of the Guild Initiative as a favor to Queen Jennah.

Tell me more about the Guild Initiative.

What is the Tyrian Explorer's Society?

The Tyrian Explorer's Society is a group of cartographers, adventurers, and wanderers. They've made it their purpose to create a complete map of Tyria.

About the Guild Initiative...

How was the Guild Initiative formed?

When the Pact fleet was decimated, a decentralized solution to fighting the Elder Dragons was necessary. The successes of notable guilds inspired the formation of the Initiative.

Which guilds inspired the formation of the Guild Initiative?

Destiny's Edge was an inspiration, of course, but honestly, Commander, you and your comrades' battle against Scarlet Briar has been a guiding light.

I've been following your exploits. Thank you for all the good you do! The Initiative wouldn't exist without you.

I'm glad to hear it, but I have more questions.

I have more questions about the Guild Initiative.

I have more questions about the Guild Initiative.

I have other questions.

Haven't I heard of you?

Oh, well, possibly. I'm something of an archaeologist. I was on the expedition to retrieve the Claw of Khan-Ur from the fallen city of Ascalon.

Oh! Now you're in charge of the Guild Initiative?

Well, yes. See, there was this old Krytan artifact, and... let's just say I ended up owing Queen Jennah a favor. She asked, and here I am.

I have another question for you.

What are your personal thoughts about the Initiative?

It's a steady paycheck, I suppose. I'd like to be out finding lost artifacts, but if I can't do that... well, I can say that I'm proud of what we're accomplishing.

I have another question for you.

I have other questions.;

Prior to Heart of Thorns/Guild Initiative
I recognize you. <Character name>, right? My name is Dougal Keane. I'd been wondering if I'd see you come through here at some point.

Do I know you?

As a member of the Vigil, I get pertinent information sent my way. You've been making a name for yourself, but I'm sure you're aware of that fact.

You're with the Vigil? You don't look like it.

I've never been one for uniforms. General Soulkeeper made an exception on the whole dress code thing. She kind of owes me one.

What do you do for the Vigil?

I mentor the younger Vigil members about the dangers they may face in the field. Of course, I do keep an eye out to see if anything interesting pops up. still an adventurer at heart, I guess.

What can you teach me, Vigil teacher?

I've got a lot of experience as an adventurer, which I'd be happy to pass along. How can I help you?

Have any tips on navigating dungeons?

That happens to be a specialty of mine. I can tell you about traps, combat tactics, or just general techniques for survival.

Tell me about traps.

Traps are not to be taken lightly, but every trap has a mechanism. Once you work out what that is, there's always a way to get past it.

Tell me about fighting enemies in dungeons.

Things that are strong enough to live in dungeons are the most dangerous members of their kind. Never take your eyes off of them and never give them a chance to surround you.

Tell me about surviving in dungeons.

Watch your teammates. Play off each other, and don't be afraid to change things up. A quick swap of your tactics can be the difference between victory and defeat.

I suppose I'm most known for being one of the group of adventurers who traveled into Ascalon City to retrieve the Claw of the Khan-Ur.

How'd you get into Ascalon City? Isn't it overrun with ghosts?

I'd been there before, though that's a memory too painful for me to talk about. We found the Claw in the Royal Treasury there and returned it to Lion's Arch.

What happened on the way back?

Very little, honestly. We returned and delivered the Claw to the charr, which brought them to the negotiating table. The rest is history.

Interesting. Talk to you later.

Thanks for the information. Talk to you later.

Tell me about your group.

There were five of us. Riona and Ember, human and charr. Both of the Vigil. Gullik, a norn warrior. And then there...were the sylvari Killeen and the asura Kranxx.

Why the hesitation when you mentioned Killeen and Kranxx?

They didn't survive the journey. Killeen was killed by a Branded creature and Kranxx...well, he died a hero. And that's all I'll say about that.

Do you keep in touch with the others?

I'm still close with Ember, and Gullik comes through Lion's Arch on some wild adventure.

Riona betrayed our group. She wanted to give the Claw to the Flame Legion hoping it would lead to a charr civil war. It's kind of a sore spot for me.

Why was the Claw so important?

Simply put, it opened up the chance for peace between the humans and the charr. But there were a lot of people making strides in that direction before I came into the picture.

Thanks for the chat.

What are you doing now?

I mentor the younger Vigil members about the dangers they may face in the field. Of course, I do keep an eye out to see if anything interesting pops up. Still an adventurer at heart, I guess.

I must be on my way. See you later!

Actually, I think I've got everything I need. Thanks!

Well met. I must go.

Talk to you later.

Good to see you. I've got to get moving, though. Good-bye.

I've heard of you!

Whatever you've heard about me was probably exaggerated. I'm just a man who knows how to get things done.

You recovered the Claw of the Khan-Ur!

Simply put, it opened up the chance for peace between the humans and the charr. But there were a lot of people making strides in that direction before I came into the picture.

Have any advice you'd be willing to share? (same as "What can you teach me, Vigil teacher?")

Thanks for the chat.

Greets
How are you?
Good to meet you.
Be careful out there.
Hey, there.