This is what your curiosity gets you.

Captain Mai Trin is the leader of the Aetherblades and one of the generals of Scarlet's Alliance. Working at the behest of Scarlet Briar, she was responsible for assassinating Captain Theo Ashford in order to weaken Lion's Arch from within.[1] Mai was captured after a Lionguard raid on the Aetherblade Retreat; however, the Aetherblades eventually freed Mai from captivity and fled with her into the Edge of the Mists as Scarlet had a specific task in mind for her.[2] While several Aetherblades fought under Scarlet in the Battle for Lion's Arch, Mai herself was absent, presumably continuing her secret mission in the Mists with the rest of the Aetherblades.

The Aetherblades started out as a particularly greedy and bloodthirsty pirate crew in which Mai Trin held high rank; when the sylvari terrorist Scarlet Briar found them and presented them with Inquest magitech and allies, the crew became far more dangerous and far more successful at the business of pirating. Officers like Mai kept the Aetherblades organized and active, and their ranks swelled as more and more unaffiliated pirates and pirate bands signed on, lured by the promise of easy money and power. Once they were in, however, they found it problematic to get out again, as Scarlet had plenty of work for them to do and kept them hard at it or they would face her wrath.[4] The Aetherblades managed to steal Pact airships and modified them into their own vessels called aetherships.[5] 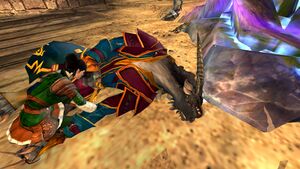 Captain Trin attempts to help Garrot Ambercowl to his feet.

Mai Trin was first seen attending the Dragon Bash in Lion's Arch while disguised as a festive onlooker in 1326 AE. She offered her help as a healer during the Aetherblade attack on Dragon Bash after the ceremonial effigy had exploded and caused the death of Captain Theo Ashford as well as injured several people nearby. The enigmatic E wrote letters to the Pact Commander and other able adventurers, asking them to seek out Marjory Delaqua in order to figure out the mastermind behind the attack before anything happened to the rest of the Captain's Council.[6] Logan Thackeray got involved in the case as well by covertly hiring Marjory and her assistant Kasmeer Meade to bring the killer to justice as he did not want the death of his family friend Theo Ashford go unavenged in case the Lionguard were unable to find the culprit.[7]

Inspector Ellen Kiel of the Lionguard, Marjory and the Commander began investigating the crime scene soon after. Marjory provided the group with Magister Tassi's device which could read energy fluctuations. The trio discovered that the effigy's energy discharge had been released on purpose. Their initial investigations led them to Mai Trin whose aura glowed with energy residue, but they deemed her innocent once they realized that she had been tending the fatally injured charr representative Garrot Ambercowl whose residue they believed had passed on to her.

Further investigations revealed that the Aetherblades had tampered with the kodan representative Trembling Song's offering and threatened the racial representatives Astorra and Morraloo to carry unknown offerings to the effigy. With the suspects' testimonies and additional ingredients to finetune the Tassi device to perform a new scan, Ellen Kiel realized that Mai Trin had actually been the culprit behind the sabotage all along. Angered, Mai summoned her Aetherblades and First Mate Horrik to distract the party while she retreated into the concealed Aetherblade Retreat within the perimeter of Lion's Arch to command her troops from there.[8]

Ellen Kiel eventually discovered the hideout and led a group of Lionguard, including the Pact Commander who had offered to help them with the investigations, to bring the elusive Aetherblade captain back to face justice for her crimes. The Lionguard fought their way through the retreat, eventually cornering Mai Trin and her first mate Horrik who were in the later stages of evacuating the breached base. Upon being discovered, Mai lamented that the sudden Lionguard invasion had foiled her scheme and would make Scarlet mad. The mention of this mysterious Scarlet clued the Lionguard in to the fact that the Aetherblades were actually working for some unseen mastermind.

Realizing that Scarlet might not forgive her for her failure and that the Lionguard wanted to avenge their fallen, Mai resolved to face combat on her own terms. Horrik perished in the following battle, but Mai was apprehended instead after pleading mercy as Ellen wanted the information the Aetherblade captain had.[9] Captain Magnus the Bloody-Handed declared that Ellen would be eligible for the title of captain thanks to Mai Trin's airship which Ellen had confiscated during the raid.[10] Ellen would eventually rename the airship the Phoenix Dawn.

The Edge of the Mists[edit]

Mai spent time incarcerated in Fort Marriner and taunted both Ellen Kiel and the Pact Commander, who had tried to question her for her motives, while ominously stating that they should keep their eyes to the sky. She was later freed by her Aetherblades and taken to the Edge of the Mists, pursued by the Commander's allies Braham and Taimi. Braham vowed to wring Mai's neck for escaping, as the resulting chaos had led Taimi into a dangerous area where the young asura could have been killed. The Aetherblade captain eluded capture, however, and learned that Scarlet wanted her alive for another mission suited for her talents.[2]

Marjory's later investigations revealed that Mai had been acting at the behest of Scarlet Briar, who had wanted an ally on the council. Kasmeer and Marjory speculated that it was so Scarlet could weaken the city's defenses from within.[1] These fears were founded once Scarlet's Alliance invaded Lion's Arch.

Mai Trin and the Molten Alliance and Toxic Alliance leaders did not participate in the assault on the port city. Instead, Mai focused on carrying out the mission Scarlet had given her in the Mists; however, she did muster, stage, and send out Aetherblades to reinforce Scarlet's forces in Lion's Arch.[4] Even after Scarlet's fall, Mai remained elusive in the Mists along with some of the Aetherblades who had accompanied her there. The Aetherblade captain's evasiveness led the gossiping Wild-Eye Miller to speculate that Marjory might have deliberately let her go, and he claimed that Mai was actually Marjory's long-lost sister and how it was supposedly a great family shame.[11]

Section-stub. This key section of the article is incomplete. You can help the Guild Wars 2 Wiki by expanding it.
Reason: Add plot reveals about her time with Joon and Yao etc.

Section-stub. This key section of the article is incomplete. You can help the Guild Wars 2 Wiki by expanding it.
Reason: Add plot involvement. 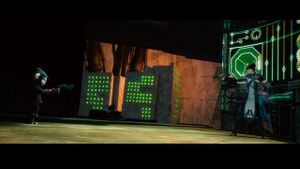 Ankka confronts Mai Trin during Deepest Secrets.
Section-stub. This key section of the article is incomplete. You can help the Guild Wars 2 Wiki by expanding it.
Reason: Add plot involvement.

Section-stub. This key section of the article is incomplete. You can help the Guild Wars 2 Wiki by expanding it.
Reason: Add missing chapter involvement.