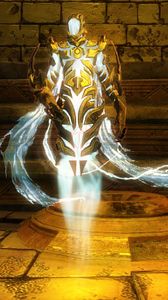 Enchanted Armors are tools created by the Forgotten long ago. Previously used in the Crystal Desert, they have since been upgraded into what is seen nowadays in Auric Basin. They are used by Exalted and those they accept as allies to defend the city against invading Mordrem. The majority of the Enchanted Armors resemble the Exalted Bastions in appearance, though are much larger. Others resemble the Exalted Burnishers without masks, similarly much larger. Enchanted Armors can be worn as suits as well as being automated.

When spawning at pylons

Section-stub. This key section of the article is incomplete. You can help the Guild Wars 2 Wiki by expanding it.
Reason: Dialogue after pylon activation, often something like "Returning to North/South/Westwatch" though eastwatch is more unique

Beginning of Trial by Fire
"Awaiting the worthy."