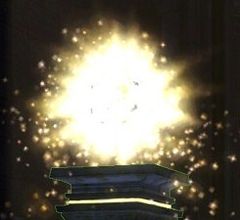 In WvW, each Borderlands map had a single Orb of Power. Initially, these were held by the home team in the Cradle of Power and defended by the Keeper of the Orb. Invaders could defeat the Keeper and take the Orb to an Altar of Power in a Keep their team controlled, granting bonuses to their team. Once an orb was removed, players only had 15 minutes to place it at an Altar before it was returned to the Cradle of Power.

When someone picked up the Orb of Power, their location became visible on the map to all servers. In addition, holding the orb slowly drained the wielder's health, but did give them access to a variety of new skills. The Orb could be dropped at any time. Each Orb of Power granted the owning world a 5% boost to maximum HP and 50 bonus points to all stats. Once placed, an Orb of power could not be moved by that team, until an enemy picked it up first.

In the November 1st, 2012 update Orbs were removed from the game, due to hacking and balance issues.